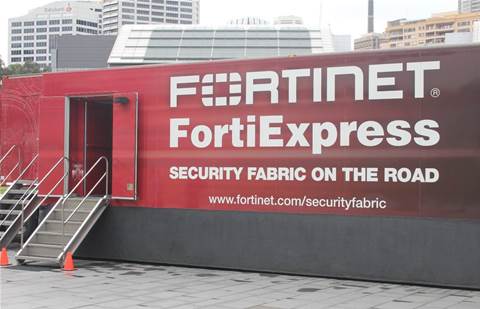 Fortinet executives said the company capitalised on its SD-WAN cost and performance advantage to land six SD-WAN deals greater than US$1 million in the second quarter.

The SD-WAN surge has also driven interest in other Fortinet Security Fabric products, Jensen said, with about 70 percent of SD-WAN deals having a services component in the mix. And since FortiGate is part of the FortiOS operating system, customers can rely on an integrated single box covering both security and SD-WAN networking that's easy to manage, said Ken Xie, Fortinet's founder, chairman and CEO.

"We feel we have a much better, broader, and more advanced approach," Xie told Wall Street analysts Thursday. "We see a huge potential going forward."

Xie chalked much of Fortinet's advantage in SD-WAN up to the company's proprietary ASIC chip, which he said gives the company a leg up in price. In order to address the security needs around SD-WAN, Xie said many competitors have resorted to adding computing power or having multiple boxes, both of which come at a high cost.

"Our advantage is very huge," Xie said. "As we keep investing in marketing and sales coverage in this space, we do believe we'll become a leader in this space."

As Fortinet increases its market share in SD-WAN, Xie said economies of scale will make it so that the cost of each ASIC chip is lower, which in turn will allow the company to enjoy better margins. And unlike competitors that are focused either on traditional network security gateways or handling applications in the cloud, Xie said Fortinet's infrastructure-centric approach will pay dividends going forward.

"The infrastructure security trend will keep going for the next ten-to-twenty years," Xie said. "We are well-positioned for that change."

Fortinet's stock jumped US$6.98 (8.83 percent) to US$86 per share in after-hours trading. Earnings were announced after the market closed Thursday.

From a geographic standpoint, Fortinet's sales in the Americas role to US$226 million, up 19 percent from US$189 million the year prior. The Americas accounted for 43 percent of Fortinet's revenue in the quarter, which is unchanged from last year.

In the coming quarter, Fortinet expects to see diluted non-GAAP earnings between US$0.55 and US$0.57 per share on revenue in the range of US$525 million to US$540 million. Analysts had been expecting earnings of US$0.53 per share on sales of US$524.1 million, according to Seeking Alpha.