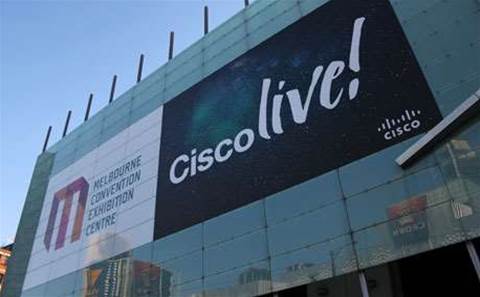 More than 4,000 people including Cisco resellers, IT directors and engineers descended on Melbourne's Convention and Exhibition Centre this week for Cisco Live, the networking giant's premiere event of the year.

While there are literally hundreds of sessions and workshops at the event, here are four major takeaways for those that can't be at the event: 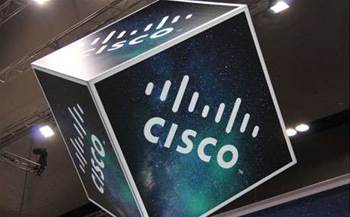 The networking giant's credentials in the server and data centre space continue to grow, including satisfied key customers. At Cisco Live this week Deakin University laid out the story of its move from 450 "pizza box" servers several years ago - when it was buying a "6-pack" of servers a month - to 1,200 virtual machines in an effort to cope with demand on its hybrid cloud. The university's infrastructure services director Craig Warren said it's now possible to spin up 30-40 VMs overnight, whereas previously deploying a server would have taken eight weeks.

Cisco's data centre credentials also received a boost with news this week that Telstra has partnered with the vendor to build a public cloud on Cisco's platform. Cisco is not just providing the equipment, it will have a cloud team working with Telstra to implement and manage the platform. 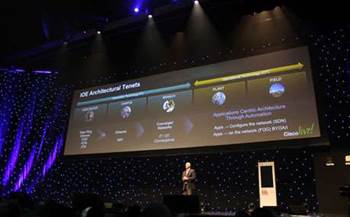 While IP telephony was once the focus for Cisco, the vendor is now framing its discussions about the cloud around a concept it calls "application centric infrastructure" (ACI). This involves a push to automate tasks like applying firewall rules for servers and rules regarding which applications servers can talk to which databases. Faster application deployment will mean lower capex, argue Cisco executives.

In this area, Cisco is moving to distance itself from the proponents of software defined networking (SDN). "We tried that 10 plus years ago," said senior vice president of marketing at Insieme Networks, Soni Jiandani. "You'll still need to mange two different networks. You still will have higher operational costs. There are lots of questions about how will this scale." Rather than virtualising the network, the Cisco pitch is that virtualisation needs to take into account applications and multi-vendor hypervisor environments.

Cisco's applications focus extends to its partnerships - at Cisco Live this week the vendor outlined numerous software partnerships it has formed with the likes of Cloudera, Mapr and Splunk. In Australia Cisco has also begun working this year with three independent software vendors. In addition, the vendor had a major win with the announcement that Optus will offer a hosted contact centre service to large businesses using Cisco's hosted collaboration platform. Optus will be the first telco in Australia to do this.

Internet of Everything moves from theory to reality 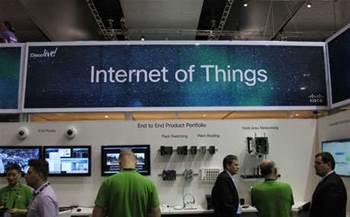 What was once a "science project" (as one Cisco executive described it this week) is now hard to escape when talking to Cisco. The concept is a central theme at this week's Cisco Live event in Melbourne, with Cisco pointing to Brisbane city's deployment of free Wi-Fi and video chat, as well as digital signage and GPS locators on buses.

Cisco also points to GE using sensors in airplane engines to collect up to 5,000 data points a second. Cisco also showed off examples of city-management apps, whereby managers could monitor traffic data. They also pointed to a parking app that allows drivers to reserve a parking spot in the city.

Examples of Australian businesses taking advantage of this trend were also demonstrated this week at Cisco Live. In Tasmania, 230 sensors are being rolled out at the Pooley Wines vineyard to help monitor for disease. A prototype emergency services vehicle was also rolled out as an example of the Internet of Everything - the vehicle is equipped to monitor weather data, hydrology data, real-time video images from helmet cameras, as well as videoconferencing. The vehicle uses Cisco's UCS platform.

CRN spoke to one vendor in this space Opengear, which is looking to signup Australian partners. The company makes a remote out of band network management device used in the finance, healthcare, telecommunications, media and other sectors. Opengear has been growing 50 percent a year for the last three years, and while the majority of its revenue comes from overseas markets, it is now turning its focus to the Australian market. The company is predicting an explosion in the number of devices its management box connects to, and is bringing its US channel program to Australia, CEO Rick Stevenson told CRN today.