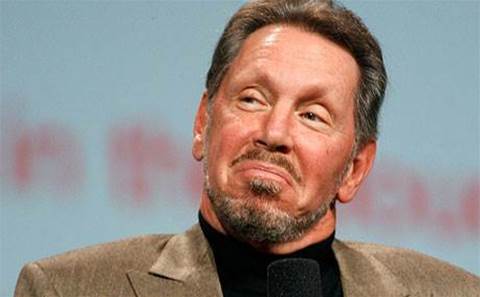 Oracle is growing again, and that is a big deal. The enterprise software giant hit a revenue high in 2014, and every quarter since then has been downhill.

Except for the fourth quarter of 2017 which recently ended, the first in about three years to see growth for one of the world's largest and richest technology vendors. And Oracle leaders, including co-CEOs Mark Hurd and Safra Catz, and CTO Larry Ellison, emphasised the driver was a surge in cloud sales.

Oracle's total Q4 revenue was up 3 percent to US$10.9 billion, but its legacy businesses were all either flat or in decline.

The consensus takeaway is that Oracle has passed an inflection point, emerging from the dark days of cloud transformation to the sunny era of recurring revenue.

"We had a tremendous quarter in just about every way," said Catz during the company's earnings call.

Adoption is at an all-time high, declared the co-CEO, and more importantly, "cloud has become our predominant growth vehicle."

Cloud and on-premises software together grew by 5.3 percent to US$8.88 billion in Q4. Total cloud revenue in the quarter, however, was up 66 percent, to US$1.4 billion, in a non-GAAP measure. That's still a small percentage of Oracle's US$7.5 billion on-premises software business, but that legacy revenue stream has flatlined. And hardware sales declined 12 percent, Catz told investors

Oracle expects cloud revenue, across SaaS, PaaS and IaaS to continue to grow somewhere around 50 percent over the next year, according to guidance Catz announced.

Oracle founder Ellison often talks about Oracle being the first vendors to have rewritten all its legacy software for the cloud.

In non-GAAP accounting terms, that cloud software business, in Q4, for the first time crossed the threshold of US$1 billion in sales. Ellison, true to form, couldn't resist using those results to take some potshots at rival Salesforce.

Oracle, for the second year in a row, sold more recurring revenue than the CRM kingpin, he said and is "on the way" to overtaking Salesforce as the leader in the SaaS market.

Behind his confidence, Ellison says is a simple fact - Oracle offers software in nine market areas around the broader categories of ERP, HCM and CRM. Salesforce, he said, only competes in three of those areas. And Oracle is the clear leader in cloud-based ERP, which he points out is the largest application market. Not CRM.

Mark Hurd reported that ERP sales were up in the quarter 156 percent organically, meaning NetSuite wasn't included in the tabulation. That gives the business management suite a US$1.2 billion run rate. HCM software sales in the cloud grew by 96 percent, and other front-office solutions were up double digits as well, also organically.

PaaS and IaaS are the two layers of the cloud stack that were mostly grouped together in Oracle's financials.

The platform-as-a-service and infrastructure-as-a-service offerings, often sold together, saw revenues up 40 percent to US$397 million, or 42 percent to US$403 million in non-GAAP accounting. The products were grouped, Catz said, "as the synergies and cross-selling between these two businesses is very high, and this is also how we're measuring our internal organization."

Ellison predicted an acceleration in that growth as more customers bring their Oracle licenses and workloads into the cloud. And the margins for PaaS and IaaS can be extremely high, he said. While PaaS wasn't broken out individually, Oracle also attributed the combined SaaS and PaaS portfolio 1.2 billion in the quarter, growth of 75 percent in non-GAAP measures.

Oracle's overall cloud growth was impressive, but the technology giant is looking to make a statement in the infrastructure market.

It got a boost earlier this week when Oracle public cloud was included for the first time in Gartner's Magic Quadrant for IaaS, and as a visionary vendor no less. Ellison is now dead set on promoting the cloud infrastructure business his company was late to enter, and still hasn't established itself as a major player. On the financial releases, Oracle broke out that business only in GAAP terms, showing 23 percent year-over-year growth of a product that barely existed last year.

Catz said on the earnings call that total IaaS revenue, in non-GAAP accounting, was US$214 million, which is 29 percent growth and at the high end of her guidance for that product. Ellison said on that call that Oracle's primary competitor in IaaS now is Amazon Web Services.

But AWS, the industry leader, is roughly expanding a business that's almost 20 times larger than Oracle's almost twice as fast as Oracle. And hyper-scale competitors Google Cloud Platform and Azure, also way ahead of Oracle in market share, are consistently achieving triple-digit growth.

"Old IaaS was a slower growing business. Our Gen 2 IaaS is much faster," Ellison said. "We expect our PaaS and IaaS businesses to accelerate into hyper-growth," he said. "The same growth we see in SaaS."

The strategy for winning customers to Oracle's cloud is leveraging its massive legacy customer base, especially Oracle's preeminent position as a database vendor. That seems to be working.

In a big customer win, AT&T, a long-time Oracle customer, has entered a significant cloud deal. The telecom giant announced it would begin migrating thousands of internal databases to Oracle's cloud. AT&T is just the beginning, Oracle leaders said.