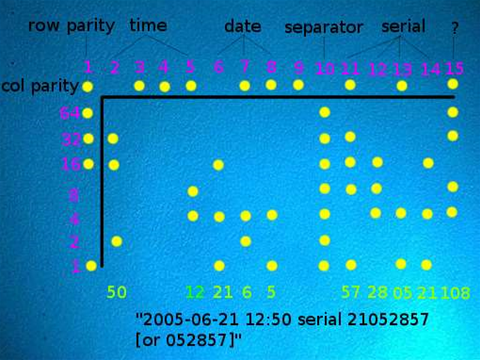 The codes are used by the United States Secret Service and other national government agencies to associate printed out documents with specific printers, revealing information such as date, time, and device serial numbers.

The yellow dots are visible but hard for the naked eye to see. Using a microscope, the researchers were able to make them out, and deduce that the dots could be used to encode up to 14 seven-bit bytes of tracking data that shows down to the minute when a document was printed out.

EFF has made the source code available as a free download, licensed under the GNU general public licence (GPL).

Fuji-Xerox is one of several printer manufacturers that agreed to embed a data tracking facility in its devices at government request.

Originally intended as an effort by the US Secret Service to track and identify counterfeiters, the use of embedded tracking information in printouts has been linked to government spying on political, human rights and environmental organisations over the past years, sparking fears of privacy violations.

Although the EFF said it was safest to assume that all laser printers embed tracking information of some form, testing showed that some devices from HP, OKIdata, Samsung and Fuji-Xerox's Phaser range did not include the yellow tracking dots in documents.