Getting dirty with the ruggedised market 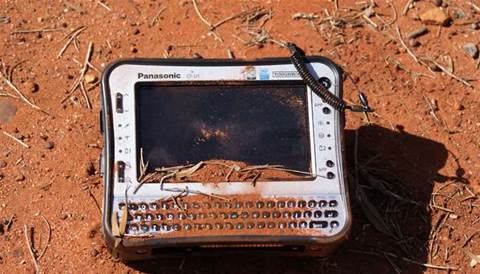 Here’s something you’d never expect: Windows Mobile lives. No, not the “Modern UI” or Metro interface from Windows Phone 7, but the good old also-ran that powered a raft of pre-smartphone, smartphones. And guess where it’s alive? In the ruggedised market, where the ability to drop something onto concrete outweighs the sex appeal of a decent interface and app ecosystem.

But the trends of consumerisation, app stores and modern interfaces has to have some sort of impact … eventually. And it’s Android that poses the biggest challenge to ur-Windows premacy.

According to Bryan, there’s a fundamental shift in the rugged space, away from things looking like they were designed by the military towards the consumer ideal of thin, light and attractive. It’s just that the ruggedised makers are throwing a bit of what they do best into the mix.

“Weight has been cumbersome with field use,” noted Bryan. “The Pad style devices are becoming increasingly popular. People like that form factor, it works well in the field.”

Interestingly enough, although Getec has been focused on Windows, Android is starting to make inroads into the ruggedised field.

“Android has struggled for acceptance, but that is changing,” said Bryan “This is due to the release of Android 4.1 and there are many more applications being developed for that operating system.”

Movement at the station

Tablets are also key for Sektor Distributors, which has recently acquired the distribution business of J Mills Distribution, and its franchise Motion Computing’s rugged tablet PCs.

Sektors’s general manager for business in Australia, Cameron Arnold, said the growth potential for rugged tablets is massive among the partner community in Australia.

Interestingly enough, however Arnold also sees the market shifting from “mil-spec” towards devices that are thin, light, attractive – and also rugged.

“There’s a dramatic increase in mobile and that has really been lead by consumer demand,” Arnold said. “In enterprise, there have been challenges around the durability of consumer devices, the ability to manage devices, and also total cost of ownership.”

Arnold said companies like Motion are building devices that both look good, and also have the robustness required by field workers, and their employers. And it’s this robustness that leads to satisfactory TCO, and also worker satisfaction with a device that’s appealing to use.”

Arnold said Windows Mobile is still an important part of the business, but Windows 7 is making in-roads. And as far as he is concerned, Android is too fragmented, and doesn’t have the interoperability to really make a difference in the ruggedised space.

Gartner agrees with Arnold, with a recent report “Marketscope for the Ruggedized Handheld Computer Market” saying Android’s fragmentation and incompatible apps between various versions counting against it. And this is despite the fact Android comes license-free from Google.

Overall, then, the ruggedised market still belongs to Microsoft. However doubts over Windows 8 – in particular its interface – means Windows 7 is going to be the next logical stepping stone for the ruggedised market, with Android coming in second, and needing to prove its fragmentation won’t count against it.