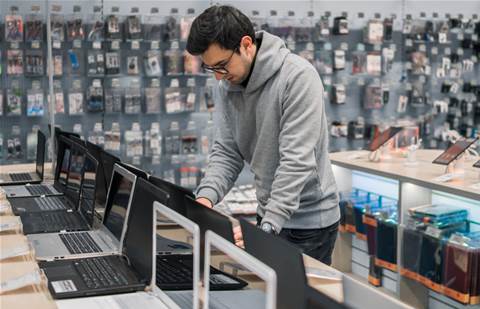 IDC analysts said the drop was mostly due to supply and logistics problems due to continued COVID-19 lockdowns and related port snarls. Macroeconomic trends globally are also providing some stiff headwinds.

“Fears over a recession continue to mount and weaken demand across segments,” said Jitesh Ubrani, research manager for IDC’s mobile device trackers, in a statement. “Consumer demand for PCs has weakened in the near term and is at risk of perishing in the long term as consumers become more cautious about their spending and once again grow accustomed to computing across device types such as phones and tablets.”

But it’s not all doom and gloom in the report. IDC notes that the total PC shipment volume is still comparable to the beginning of the pandemic and well above pre-pandemic levels. Shipment volumes in the second quarters of 2018 and 2019 were 62.1 million and 65.1 million units respectively.

“With education PC appetite saturating and consumer demand stagnating, the US PC market is staring at another quarter of double-digit decline across most segments,” Neha Mahajan, research manager with IDC’s devices and displays team, said in a statement. “Commercial PC demand is also showing signs of a slowdown, however there are still pockets of growth expected in certain commercial sub-segments where demand for low-mid range Windows devices remains active and unfilled.”

The slowdown seems to be impacting all players in the tech sector, as research firm Gartner reported tablet and phone shipments taking a dive in 2022 as well.

Lenovo held onto the top spot with 17.5 million units shipped in the second quarter, taking 24.6 percent of the market share but with shipments falling 12.1 percent year-over-year. HP clung to second place with 13.5 million shipments and Dell Technologies took third placed with 13.2 million units shipped. HP took the biggest year-over-year loss, with a decline of 27.6 percent.

Apple slid below Acer Group to fifth place with 4.8 million shipments, a 22.5 percent decline year-over-year. Apple and Asus were locked in a statistical tie at fifth place. During its most recent earnings report, Apple said it would take a US$8 billion revenue hit because of the COVID-19 lockdowns and supply chain issues. Still, IDC expects the Cupertino, Calif. powerhouse to ramp up production in the second half of the year for better results.