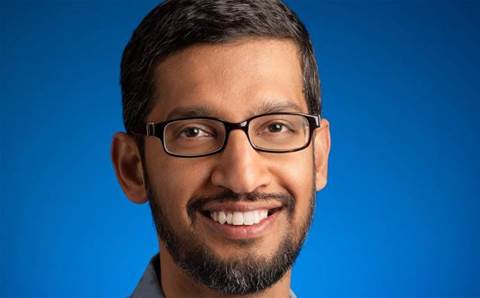 Google's cloud business was a strong revenue driver for parent Alphabet in a quarter which saw earnings dragged down by a hefty fine from the European Union.

In a Q2 earnings call on Monday, Google CEO Sundar Pichai said tech giant is investing in building out more data centres to meet growing demand for its cloud services, for which machine learning capabilities will be a major differentiator in the market.

Google is winning big customers across diverse use cases, Pichai said in response to an investor asking if there were specific types of workloads gravitating to GCP.

"I would say the breadth of what we've seen has really surprised me," Pichai said of the GCP customer base.

Alphabet doesn't break out financials for Google Cloud Platform or any other single product.

But Google's "other revenues" – a mix of non-advertising based businesses, primarily driven by cloud and hardware – was up 42 percent from the same quarter of the previous year, to US$3.09 billion.

Google's CEO offered another metric: the number of new cloud deals worth more than half a million dollars was three times what it was the previous year.

"We want to stay best in class. We're clearly planning for that  – planning Planning ahead for infrastructure," Pichai said.

"All the teams and structure Diane has put in place is continuing to work well," he said, referencing Senior Vice President Diane Greene, who runs the cloud division.

Alphabet CFO Ruth Porat said during the call the company saw "substantial growth in cloud" over the quarter.

Head count was up by more than 1000 employees. The "vast majority of new hires were engineers and product managers," mostly working in the cloud division, Porat said

The hiring across technical and sales roles in the cloud division is "consistent with the priority we place in this business," she added.

Porat told investors that Google is leveraging its infrastructure, distribution and engineering talent to differentiate its products, most notably with machine learning capabilities.

Alphabet's overall revenue of US$26 billion was up 21 percent year-over-year in the quarter, which ended 30 June. As usual, those sales were almost entirely driven by Google's advertising business, which grew 25 percent to US$25.8 billion.

Overall growth was led by advertising revenues from mobile search, "with a strong contribution from YouTube," Porat said.

But earnings took a hit from the European Commission's US$2.7 billion for antitrust violations related to how Google ranks search results for shopping queries.

Alphabet's quarterly earnings per share of US$5.01 beat Wall Street expectations by 52 cents per share, and would have been significantly higher if not for the EU fine.

In response to more demand for cloud services from new and existing customers, Google is investing in data centres to provide them "the fastest, most reliable service," Pichai said.

The company has recently opened new regions in Northern Virginia, Singapore, Sydney and London, he said.

Another focus for expanding the cloud business has been to build out partnerships with other enterprise vendors.

Pichai noted an expansion of Google's pact with SAP, and a new partnership with Nutanix to integrate their on-premises infrastructure with GCP to offer customers hybrid environments leveraging application container technology, including Kubernetes.