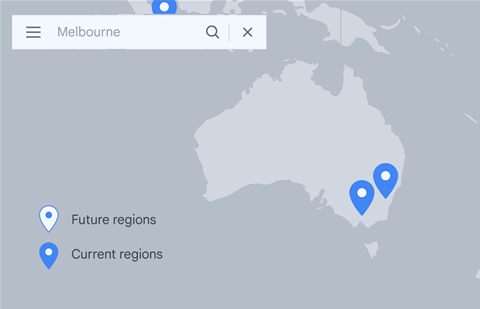 Google Cloud has launched its new Melbourne region to expand the availability of its services to the Victorian region.

The new region is the second in the region, complementing the Sydney region that first brought Google Cloud to Australia in 2017.

It also has points of presence in Canberra, Perth and Brisbane, with another set to launch in Auckland, New Zealand in August, Google Cloud ANZ cloud customer engineering director Matt Zwolenski stated in a press briefing.

“We launched our first region in Australia in 2017 and since then, we’ve had overwhelming feedback from our customers that ‘we'd love you to expand your services, and launch another region’. So, on the 29th, we will formally cut the ribbon,” Zwolenski said.

“The region makes it easier for small customers, small organisations, small and medium enterprises, startups, digital natives and large traditional enterprises, to leverage on-demand compute network and storage resources, as well as very advanced data and AI capabilities and app modernization capabilities that we have within Google Cloud.”

He said that one major driver of the new region was to make Google Cloud’s presence in Australia more disaster-proof.

“We believe, as of today, we are the only hyperscale cloud to offer three zones in each city,” Zwolenski said.

“If you were to, say, run your IT services in Sydney as site A and in Melbourne or site B and we had a catastrophic failure to the whole of the city, for example, in Sydney, and you had to run for multiple months in Melbourne, you would want multiple zones within Melbourne for high availability … so we think we've really upped the level of availability that customers can adopt in Australia and lower the risk for many organisations.”

He also highlighted the investment that Google Cloud has made into subsea cables to connect the Australian region to the rest of the world.

The infrastructure has been built on a zero-trust architecture, rather than using a firewall or VPN which, Zwolenski said, “allows us to really build a highly secure, highly available low-risk infrastructure for our customers.”

He also emphasised that Google was already increasing its use of renewable power for its data centres, and offsetting any carbon use and publishing its energy usage data online, with the goal of being carbon neutral by 2030.

The regional expansion will mean that Google Cloud will be recruiting more service provider partners in Australia, Zwolenski asserted in response to a question from CRN, saying “Google Cloud’s intention is to be extremely channel and partner-centric, so our goal is, wherever possible, to be working with, with channel partners in everything we do.

“We've been growing fast. Obviously, with that, we're going to become even more channel centric and grow fast. We will have to continue expanding the channel. The simple answer is yes, we have a strong set of channel partners working closely with us ... and we will continue to heavily work with those and grow our businesses together.”

Eliminating departmental friction within MSPs
By Ben Moore
Jul 28 2021
6:00AM