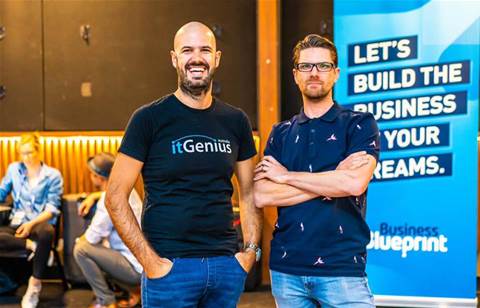 SME is a partner of Copper CRM, a CRM platform designed to match the look at feel of G Suite and therefore expedite adoption.

As part of the deal, SME founder Scott Gellatly will join itGenius as general manager to lead sales and account management teams. SME co-founder Paul Higgins will leave the company to focus on another existing venture, Build Live Give.

itGenius founder Peter Moriarty told customers have been asking for recommendations of CRM software for many years. "We've never really had a firm answer to that because there were just so many options out there," he said.

Moriarty said he was attracted to Copper CRM since itGenius was also a customer, and due to its G Suite integration and popularity among small businesses.

"We've been partners with Scott for a number of years and we thought it was best to put the businesses together," he said. "Scott needed some help scaling up - he built a great foundation for business and we'd describe it like he's 'made it to base camp but was looking up at Everest'."

While itGenius had the option of partnering with Copper CRM directly, Moriarty said the company wouldn't have done so without Gellatly and his pre-existing Copper relationship.

“I envisioned SME to help a multitude of businesses locally and abroad and with this business move, this vision will be further realized,” Gellatly said in a prepared statement.

“itGenius had been successfully turning small and medium businesses throughout Australia into well-equipped and technology-savvy organizations for years.”

Moriarty said the acquisition is the start of a new chapter for the company.

“I’m particularly excited to partner with Copper CRM, as they are clear leaders in small business relationship-based sales software and a fantastic addition to anyone already immersed in the Google ecosystem,” Moriarty said in a prepared statement.

Moriarty wouldn't reveal specifics but said SME was acquired in a "multiple six-figure deal". He also expects overall group revenue to be "in the multiple millions" in the next financial year.