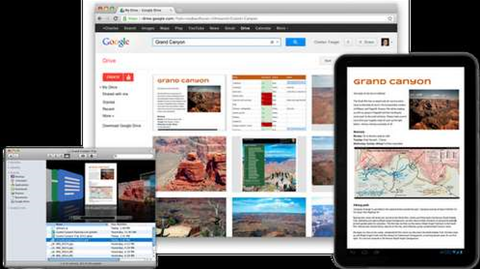 Google Drive is the search giant's answer to cloud storage competitors, including Box, Microsoft's SkyDrive, and DropBox. Google partners greeted the launch enthusiastically and said its added storage capacity and integration features give business users impetus to access the rest of Google's services.

Google storage services also offer much greater collaboration with Google Docs, which the company said is built into Google Drive.

"You can attach photos from Drive to posts in Google+, and soon you’ll be able to attach stuff from Drive directly to emails in Gmail. Drive is also an open platform, so we’re working with many third-party developers so you can do things like send faxes, edit videos and create website mockups directly from Drive."

"In the short term, I can see people moving toward it as a DropBox replacement," said Allen Falcon, chief executive officer at Cumulus Global.

"In the long-term, it will be interesting to see how it extends the cloud ecosystem. I see a potential for expanding Google Apps beyond email and basic collaboration to evolve to a cloud-based-file service with security and access you would expect from a local file system."

"Our customers are embracing this and waiting to move their legacy data into Drive," said Hoff.

Grow your software revenue by selling these 5 affordable, essential tools for the modern workplace
By Jack McCarthy
Apr 26 2012
8:07AM