Google gets deeper into hardware 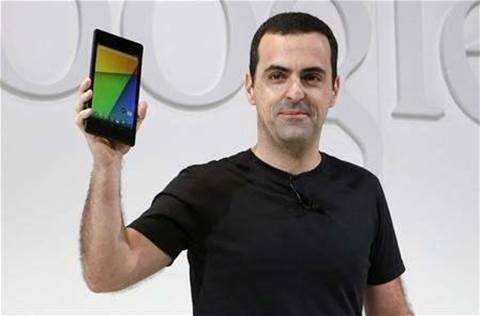 Google on Wednesday showcased a new-generation, slimmer Nexus 7 tablet that the internet search company hopes will expand its presence in consumer hardware, and ensure that its online services remain front-and-center on mobile devices.

The latest Nexus 7, featuring a Qualcomm Inc Snapdragon processor and a higher display resolution, on July 30 will be priced at US$229 for a basic version with 16 gigabytes of storage. The original year-old tablet started at US$199 for an 8 gigabyte version.

Sundar Pichai, head of Android and Chrome software, said on the sidelines of an event to launch the tablet that the internet company would make a profit off the new product. The first-generation Nexus 7, which marked its initial foray into mobile electronics, was financially a break-even product for the company, analysts have said.

"The new Nexus 7 is designed so that it's profitable for all the people involved. Retailers, us, everyone included," Pichai told Reuters.

Also on Wednesday, Google revived an earlier attempt to get into online video streaming with the introduction of the "Chromecast" -- a two-inch US$35 gadget that will plug into the back of televisions and let users stream YouTube and Netflix videos via their smartphones.

The announcements come a week before Google's Motorola division is expected to unveil the Moto X smartphone in New York. The Moto X represents the first phone Motorola has developed since it was acquired by Google for US$12.5 billion in May 2012, and is central to relaunching the venerable brand into a highly competitive mobile market.

Google and other traditionally non-hardware companies such as Amazon.com Inc and Microsoft Corp have begun making inroads into mobile devices as consumers increasingly access the Web on the go. It introduced its first tablet in June 2012, hoping to replicate its smartphone success in a hot market presently dominated by Amazon's Kindle Fire, Apple Inc's iPad.

Google, which gets the lion's share of its revenue from online and mobile advertising, wants the aggressively priced Nexus tablets to be a hit as more users would mean increased exposure for its ads.

Its Nexus line, which include smartphones and tablets made by partners like Samsung Electronics and HTC, also serve as references for manufacturers across the globe adopting its Android mobile software system.

On Wednesday, Pichai told reporters that, since its launch, the Nexus 7 line alone has accounted for greater than 10 percent of all Android tablets sold.

The company was on track to see 70 million total Android tablet activations in 2013, versus a pace of about 10 million at the end of 2012, he said.

Its new Chromecast gadget, however, will employ a stripped-down version of the Chrome operating system, now used primarily for laptop computers.

The device, which will be sold from Wednesday, invited comparisons to the short-lived "Nexus Q", which also promised to stream consumers' digital music and other content directly to their home entertainment systems. But Google indefinitely postponed the launch of the Q before it went on sale last year, following a spate of negative reviews.

Chromecast will allow users to employ their smartphones almost like remote controls, letting them play and control video applications without using a traditional remote.

"The Nexus Q was part of our effort to do the same thing. We didn't launch that, but a lot of learnings," Pichai told Reuters after the event. "Nexus Q was all about how you send content, so that was an inspiration for this."

Eliminating departmental friction within MSPs
By Alexei Oreskovic
Jul 25 2013
7:49AM