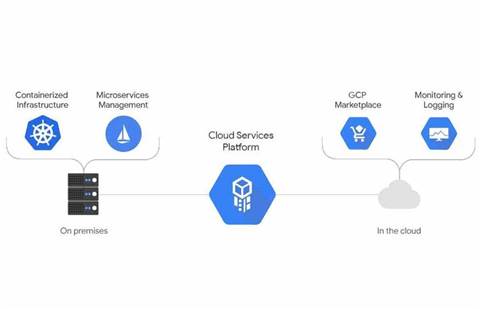 Google has launched a beta of its long-awaited Cloud Services Platform (CSP), and by doing so launched its vision for the hybrid cloud, taking a swipe at hyperconverged infrastructure along the way.

The new product is an on-premises derivative of Google’s Kubernetes Engine (GKE), the cloud-hosted tool it offers as a fine way to manage Kubernetes clusters, and therefore orchestrate containerised applications at scale. There’s also the Istio container services layer and application monitoring spanning on-prem and cloud.

GKE has been able to link with Kubernetes running anywhere for some time. This hybrid play lets users run GKE on-premises. Google hopes you’ll do so in order to develop containerised apps, or re-factor current on-prem code in containers, then move them to the cloud once you’re comfortable doing so.

Google is positioning this effort as a cloud-agnostic, lock-in-avoiding, development-centric version of hybrid cloud, no hardware required.

The cloud-agnostic argument is fair enough, because Kubernetes runs just about anywhere: plenty of vendors and clouds happily host Kubernetes services. There’s no point in pulling an old-school Microsoft trick and making a slightly-custom Kubernetes, as doing so defeats the purpose. So Google has a nice argument there.

The development emphasis is also hard to contest.

IT exists to run applications. Containers and agile practices genuinely deliver faster development. So there's a natural fit given Kubernetes has proven itself as the beating heart of Google’s own services.

Put simply, tools that make it easier to deploy applications are always welcome.

The no-hardware-required argument is a little stiff.

Which isn’t strictly true. Sure, the main reason to buy a new Nutanix or Azure Stack box is to put workloads inside the chassis and stretch to the cloud, but the likes of VMware an Microsoft Windows Server will happily manage plenty of VMs from across an IT estate without the need for dedicated kit.

Overall, however, Google has articulated a different vision for hybrid cloud by having almost zero interest in on-prem infrastructure, and making it all about application development and deployment options.

That’s not going to excite everyone, or scare the big clouds.

But it will excite developers, and they are mightily powerful influencers because enterprises will do almost anything that makes them more productive.

And with Kubernetes being a skill that currently brightens a CV like no other, finding developers to champion Google’s new hybrid effort won’t be hard.