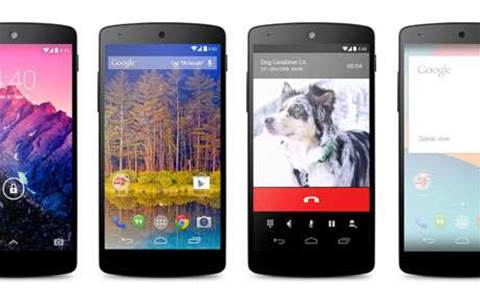 The Google Nexus 5 has been unveiled, featuring a 5in display with 445ppi and Android KitKat - for only $399 SIM-free.

The LG-made handset adds to Google's existing hardware lineup, extending it from the Nexus 4 smartphone and the Nexus 7 and Nexus 10 tablets.

It runs Android KitKat on a 2.3GHz Snapdragon 800 processor, it has a 450MHz Adreno 330 GPU, and 2GB RAM. It also features an 8-megapixel rear camera and 1.3-megapixel snapper on the front, as well as new photo tools.

"The advanced new lens on Nexus 5 captures more light for brighter night and sharper action shots," said Sundar Pichai, vice president of Android. "And with optical image stabilisation, you no longer have to worry about shaky hands and blurry pictures. A new HDR+ mode automatically snaps a rapid burst of photos and combines them to give you the best possible single shot."

The Nexus 5 comes in two colours - black and white - and two storage sizes, but there's no expandable memory slot. The 16GB version is $399 and the 32GB version is $449 - both are SIM free without a contract.

The Nexus 5 can be purchased online from Google Play; however, the smartphone is already sold out in Australia.