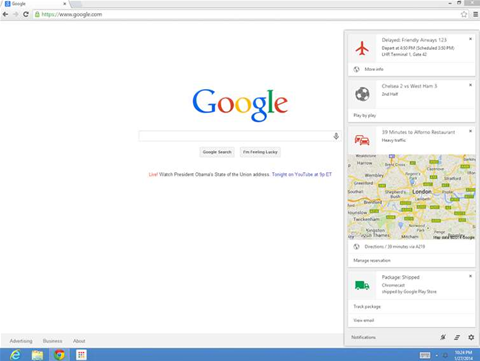 Google says it's ready to roll out a desktop version of its Google Now "personal assistant" for Chrome users on Windows and Macs.

The company announced earlier this year that it was working on a desktop version of the app, which pulls together information the company thinks will be relevant based on location, search history and other personal data.

"Starting today and rolling out over the next few weeks, Google Now users in all languages will be able to get these notifications in all channels of Chrome," the company said in a blog announcing the release.

"To enable this feature, simply sign in to Chrome with the same Google Account you’re using for Google Now on Android or iOS."

Google Now works with the company's search function and users' personal data to provide information that the company believes will be relevant, such as flight times, weather, sports results and news.

It has previously only been available as a stable version on Android and iOS devices. The desktop version will include a selection of the information cards available on mobile.

The company will use mobile phone location for geographical information, although users will be able to control location settings to make desktop results more relevant if, for example, their mobile is at home while they're using an office PC.

7 steps to MSP success: from pricing to specialisation
By Stewart Mitchell
Mar 26 2014
6:54AM