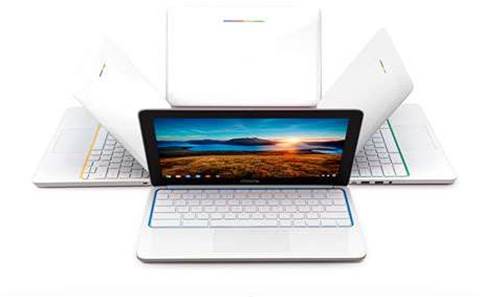 Google partner Fronde is mounting a charge on legacy on-premise applications with a package combining Google Apps with Chromebooks and Citrix.

The company is trying to tempt customers to its Fronde Cloud Workspace Solution with a $5,000 package that includes up to five loan Chromebooks, access to its "cloud-based demonstration environment" for three weeks and a host of tools, including Google Chromebook Management Console, Google Apps for Business, Citrix's HTML5 Receiver, XenApp, NetScaler and StoreFront.

Valentine said that when a customer switches to a Chrome device, "you are just ripping money out your budget".

Rather than simply cutting IT expenditure, Fronde claimed that reducing spend on "business-as-a-usual costs" frees up customers to invest in innovation.

"Businesses typically spend 80 percent of their IT investment on business-as-a-usual costs, keeping the lights on. This leaves just 20 percent available for innovation," according to a Fronde statement.

One of Google's biggest Australian coups was its account win with retail chain Woolworths, which switched its 26,000 staff from Microsoft to Google Apps in April 2013 and recently revealed it was rolling out 8,000 Chrome OS devices, according to The Australian.

While that was a direct deal, Fronde expects to soon publish its own case study of a pilot with a not-for-profit client.

Fronde's Australia country manager, Don McLean, said: "Business and IT leaders now understand the benefits of moving from traditional server computing to a cloud-based model. The death of hardware has been predicted for a while and it is now here. What this means is that the capital available for IT investment in innovation can double."

Speaking to CRN, McLean said he expected customers to dip their toe in with Google rather than make wholesale change overnight.

That chimes with an April 2014 report from Gartner, which recommended buyers "run a pilot to iron out the bugs and adjust as necessary".

The analyst firm said some of the downsides to Google Apps include that fact that Gmail Outlook support is not as good as Office 365's, that it is difficult to run a hybrid model and that Google doesn't have the kind of deep feature set found in Microsoft's productivity suite.

On the plus side, Gartner said that for IT departments facing budget pressures, "Google products offer an integrated, collaboration-centric solution that's less expensive to purchase and less complex to configure than the Microsoft Office set of products."

The launch event centred on the trinity of Fronde, Google and Citrix, but a fourth, silent partner is also integral to the suite: Amazon Web Services.

As part of the trial offer, customers get access to the public cloud giant's EC2, Cloud Formation and AutoScale products.

Fronde will host customers' legacy application workloads, such as Microsoft or SAP, on AWS's public cloud infrastructure in Sydney.

Fronde has been working with Google and Amazon for around six years; it's a Google Premier Enterprise Reseller and an Amazon Advanced Consulting Partner and Channel Reseller Partner.

Despite Fronde's close ties to Google, it is not ready to move away from AWS public cloud.

"The Google Compute Platform looks great. I love what it does, but it doesn't at the moment support Microsoft Windows – I think it is in a public beta. That is one challenge of running a Citrix workload," said Valentine.

"The other things is Amazon has a region here in Sydney and, therefore, for Australian customers, you have a platform they can take advantage of. A small part of that is sovereignty; the more pragmatic one is location... running up in Singapore or wherever, the performance will be nowhere near as good."

Citrix is a more recent partnership than AWS or Google, he added.

"Our traditional business was software development and system integration. We made the move into software-as-a-service – Google, Salesforce.com, NetSuite, Amazon – and off the back of that, particularly Amazon, people start saying, 'I want to go to the cloud and I want to move this workload'."

Valentine said the Fronde Cloud Workspace Solution was a clear opportunity to easily and economically deploy Citrix for customers. "We knew that it would solve some of our challenges with customers to go Google,  because we could solve some of those 'I still have this legacy app' questions.

"Google's vision has a five- [to] 10-year horizon on it. A new startup organisation clicks their fingers and they are done [but] traditional enterprises go, 'I like your vision, however, this Delphi app, that CAD app, we can't upgrade that SAP thick client we just did the $20 million upgrade on.'

Fronde was founded in New Zealand in 1992 as a systems integrator and entered the Australian market through its acquisition of OnlineOne in May 2013.

Grow your software revenue by selling these 5 affordable, essential tools for the modern workplace
By Steven Kiernan
Jun 25 2014
7:10AM