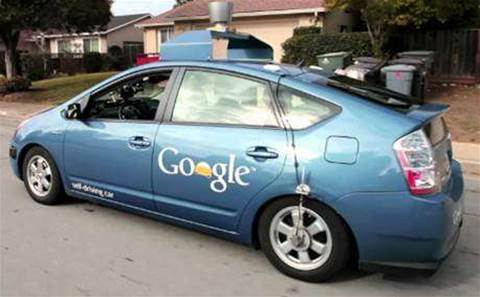 One of Google's self-driving cars was involved in an accident early in July, in which three employees were injured when a vehicle equipped with Google technology was rear-ended by another vehicle, the company said.

Several employees suffered minor whiplash in the 1 July incident, when a vehicle drove into the rear of a Lexus RX450h prototype - outfitted by Google with special sensors and software - which had stopped at a traffic light near the Google headquarters in Mountain View, California, a Google spokesperson said on Friday US time.

The employees were sent to a nearby hospital "as a precautionary measure" but were not admitted, the spokesperson said.

Google said it was the first such incident involving injuries in a self-driving car.

The technology giant, which started developing self-driving cars in 2009, said its prototype vehicles have been struck 14 times, including 11 rear-end collisions. The Google vehicle was not at fault in any of those incidents, the company said.

Google disclosed the incident in a blog post on Thursday US time.

"Our self-driving cars are being hit surprisingly often by other drivers who are distracted and not paying attention to the road," wrote Chris Urmson, director of Google's self-driving car project, in the blog post. "The clear theme is human error and inattention" in those incidents.

Google is testing a fleet of 23 specially equipped Lexus prototypes, and said it has logged more than 1 million test miles. Last month, the company began testing tiny, bubble-shaped self-driving prototype vehicles of its own design on public roads around Mountain View.

Google and other automotive manufacturers and suppliers have said the technology to build self-driving cars should be ready by 2020.

Urmson has said the company does not want to build its own self-driving cars, but would prefer to find a development and production partner.

But most major multinational automakers are developing their own so-called automated vehicles that are designed to control major functions such as steering, brakes and throttle, without human effort.

The Google self-driving cars have humans on board who can assume manual control of the vehicles if necessary.

(Reporting by Paul Lienert in Detroit; Editing by Bernadette Baum and Christian Plumb)