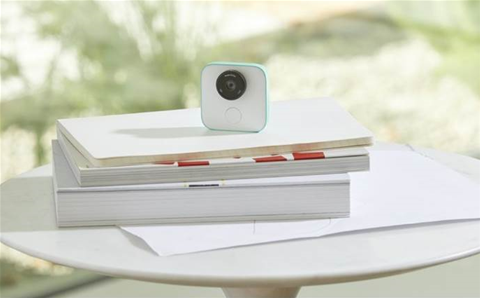 Google's announcement that it was planning to launch a smart video camera as part of its push into hardware sent shares of action camera maker GoPro down more than six percent on Wednesday.

Google Clips will be the first standalone camera from the search and advertising company, which has expanded its hardware business over the last year.

Its signature feature draws on machine learning technology to automatically begin recording when notable actions are detected. Those could include a child cracking a smile or a dog entering the frame.

It was one of a suite of new products unveiled by

Clips, which Google said is "coming soon," takes on compact cameras such as GoPro's

Google's camera has a traditional shutter button. But users may also clip the camera onto an object and have Clips automatically record "stable, clear shots" of familiar faces set by the user, the company said. Each shot lasts seven seconds, and the battery survives about three hours in the smart-capture mode, according to Google.

"We hope Google Clips helps you capture more spontaneous moments in life, without any of the hassle," Google Clips product manager Juston Payne wrote in a company blog post.

Footage wirelessly downloads through an app for Google, Apple and Samsung smartphones. Video can be stored to an unlimited online storage locker provided by Google, and high-resolution photos can be cut from the clip.

At US$249, it is comparable to GoPro's US$299 Hero5 Session, which can be controlled by voice for handsfree usage. Snap's Spectacles, which are sunglasses with a video camera on one corner, records a 10-second video after the press of a button on the frame. They cost US$129.

Session and Spectacles are typically used outdoors, whereas Google said its devices "works best when used at home with family and close friends." GoPro and Snap have not released smart-capture capability.