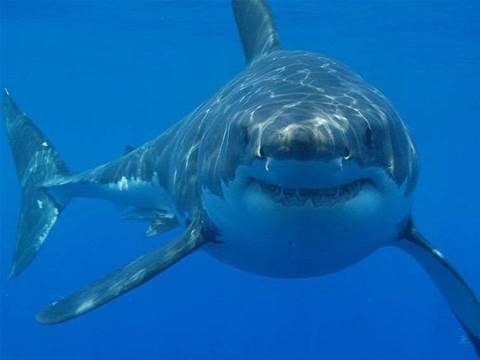 Google is investing in shark-proof undersea fibre optic cabling in order to fend off attacks from the sea's terrifying apex predators.

The story was sparked by comments made by Dan Belcher, a product manager on Google's cloud team, during the opening keynote of the company's Cloud Roadshow in Boston last week.

According to Network World, Belcher said Google invests heavily in protecting its trans-continental infrastructure, including wrapping cables in Kevlar to thwart attacks by hungry sharks.

The idea that a shark would attack a fibre optic cable isn't as unreasonable as it may sound. Scientists have shown that even when blindfolded and fitted with nose plugs, sharks can detect and kill prey, thanks to a "sixth sense" - they are able to detect the electrical fields generated by all living animals.

And, fibre-optic cables generate a stronger electrical field than the copper cables that preceded them, which is enough to trigger the shark's hunting instinct. In the mid-80s, when the new infrastructure was starting to come into its own, reports of sharks gnawing on cables started to appear.

The earliest report of this kind of behaviour comes from the Canary Islands in 1985, when sharks' teeth were found embedded in an experimental cable.

Indeed, there's even a 2010 video of a hopeful shark chomping on a fibre-optic line.

However, as the NYT article points out, there are many other more common hazards that threaten undersea infrastructure - anchors, propellers, trawler and other deep-sea fishing nets, human saboteurs, seaquakes and even submarine volcanoes can damage the cables, not to mention natural corrosion.

Additionally, this is not a new problem: in the 29 years since the Canary Islands incident, communications companies have been protecting their cables against shark attacks, previously using double layers of steel. The only thing about Google's approach that's truly novel is the use of Kevlar.

So all the galeophobes out there can rest easy for now: Jaws isn't about to swallow your internet connection.