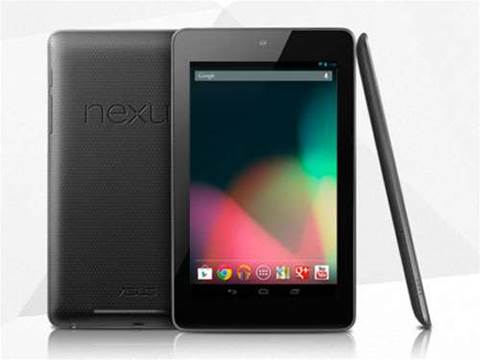 Software giant Google officially entered the tablet space this morning with the launch of its Nexus 7 tablet PC, a 7-inch device co-manufactured by Asus and positioned as one of the biggest challengers to Amazon’s Kindle Fire.

Google took the wraps of its first tablet during the keynote address of its I/O Developer conference today, along with the next-generation version of its Android mobile OS, 4.1 "Jelly Bean".

The new OS will make its debut on the Nexus 7 tablet, which will start shipping in mid-July at around the same price point as Amazon's Kindle Fire.

The tablet is available now for pre-order on Google's Play Store. It will be sold solely online through the Google store.

The lowest-end tablet currently sold by market leader Apple is its iPad 2, which starts at $US399.

The Nexus 7 will also be the first tablet on the market to ship with Google’s home-grown Chrome web browser included natively.

"We wanted to design a best-of-Google experience that is optimised around all this great content," Barra told the crowd. "We want to let you immerse yourself in all that media."

Nexus 7 has a 1200x800 HD display and a front-facing camera, and can deliver up to nine hours of video playback or 300 hours of standby time. The tablet also boasts a 1.3GHz quad-core Nvidia Tegra 3 processor, along with an Nvidia GeForce 12-core GPU.

Weighing in at 340 grams, Nexus 7 is slightly lighter than Amazon’s Kindle Fire, which weighs 413 grams.

The new Android 4.1 Jelly Bean OS, which will become available to other handset manufacturers next month, is said by Google to deliver a faster and smoother user experience compared to Android 4.0 Ice Cream Sandwich and prior releases.

It will arm users with a slew of new input options, such as offline voice typing, which can convert a user’s speech into text without the need for a wireless connection, along with gesture control, which allows users to navigate Jelly Bean’s user interface with the swipe of a hand.

With Ice Cream Sandwich, users could only use Android Beam to share web pages, maps or contact information.

Microsoft unveiled last week its home-grown Surface tablet PC, which is based on its upcoming Windows RT OS and will compete directly with other manufacturers that already partner with Microsoft, such as Samsung and Lenovo, both of which are slated to launch Windows RT-based tablets later this year.

In addition to Nexus 7, Google also announced a media streaming device called Nexus Q, capable of streaming movies and other multimedia content directly from Google Play onto a user’s TV or PC screen.

Grow your software revenue by selling these 5 affordable, essential tools for the modern workplace
By Kristin Bent
Allie Coyne
Jun 28 2012
8:02AM