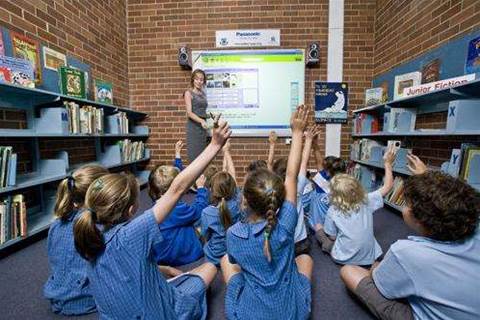 Tablets and other Android devices are found on plenty of students' desks, but now Google is looking to make it official with new classroom tools to make it easier to use Google Play apps and tablets when teaching.

For example, they've been designed to be easier to do initial set up. If a teacher is handing out tablets to a class, they only need to set up a single device, and then use NFC to “tap” it to each of the other devices to get the same apps and settings.

“We know it's been really difficult to set up tablets and use them in the classroom,” Liz Sproat, Google's head of education for EMEA, told Bett attendees in a presentation.

Google Play for Education is a dedicated store for educator-approved apps, with software designed specifically for the UK curriculum. It's divided into sections by student ages and includes primary-school content as well as apps for older classes, including GCSE revision tools. Teachers can select a free or paid-for app and have it automatically sent to the device of every student in the class – whether that's an Android tablet or a Chromebook.

The goal behind pushing more mobile devices into education, Sproat said, is to make it easier to create classrooms where children can work collaboratively or independently, accessing the tools they need as they require.

She showed an image of such a class, with happy students sprawled out with books, tablets and laptops – and no teacher to be seen. “Behind every classroom that looks like this, there's a network manager in the background up to their eyeballs in USB cables trying desperately to manage all the hardware, software and content and make it available in just the right format to every student and teacher,” she said, adding that's why so many schools are stuck with traditional classrooms. “It's kind of no wonder.”