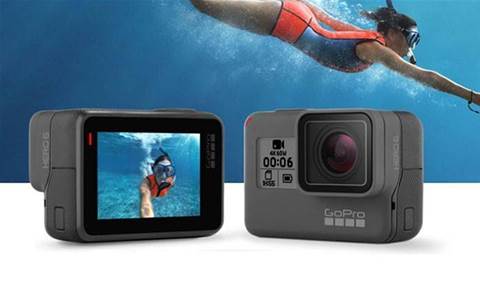 GoPro said on Monday it expects fourth-quarter revenue to fall below its earlier forecast and lowered the price of its Hero6 cameras due to weak demand, and the action camera-maker also said it would cut more than 250 jobs.

The manufacturer, whose cameras and drones are mostly used by sports junkies and travel enthusiasts, cut the price of its Hero6 cameras to US$399 from US$499 and said that would hurt revenue by around US$80 million in the current quarter.

Locally, GoPro is selling the Hero6 for A$599, which it claims is its "best price yet".

The company now expects fourth-quarter revenue of US$340 million, compared with its projection of US$470 million, plus or minus US$10 million, in November.

GoPro, once a Wall Street favorite, has been facing a decline in demand for its cameras and karma drones for several quarters, including for its Hero5 cameras in the latest holiday season.

"Despite significant marketing support, we found consumers were reluctant to purchase Hero5 Black at the same price it launched at one year earlier," chief executive Nicholas Woodman said in a statement.

Morgan Stanley said in a research note earlier Monday that the price cut for the Hero6 camera would make earnings growth difficult in fiscal 2018.

GoPro said it would lower its workforce to fewer than 1000 employees from 1254 currently. It expects a restructuring charge of US$23 million to US$33 million, including about US$13 million to US$18 million for the job cuts, in the first quarter.

Trading in the company's shares were halted ahead of the market opened.

The company is considering selling itself and has hired JP Morgan to help it with the process, a source familiar with the matter told Reuters on Monday.

Earlier in the day, the company lowered its fourth-quarter revenue forecast on weak demand for cameras in the holiday season and announced its plan to exit the drone business.

The action camera maker's shares, which fell as much as 33 percent to a record low of US$5.04, recouped some of their losses after the sale talks were first reported by CNBC.

"If there are opportunities for us to unite with a bigger parent company to scale GoPro even bigger, that is something that we would look at," chief executive Woodman told CNBC.

7 steps to MSP success: from pricing to specialisation
By Reuters Staff
Jan 9 2018
7:27AM