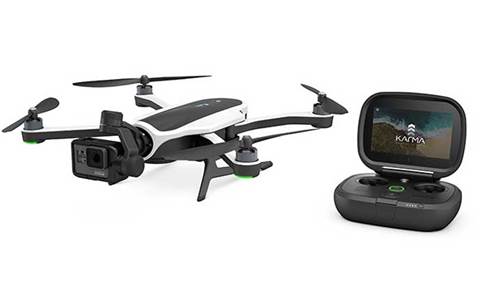 Wearable camera maker GoPro Inc said on Tuesday it would recall about 2500 of its recently introduced Karma drones because they lost power during use.

The recall comes less than a week after GoPro downgraded holiday forecasts to US$600 million to US$650 million in revenue for the fourth quarter, below analysts average estimate of US$666.14 million due to production issues with the Hero 5 Ultra HD Action Camera.

"Management might be rushing to get things out. They may be overly anxious to get things on the shelves and had a few screw-ups," Oppenheimer & Co analyst Andrew Uerkwitz said.

The company said it planned to resume shipment of Karma as soon as the issue was resolved.

The company said it would refund the purchase price rather than replace the drones, which were purchased by consumers since 23 October.

Uerkwitz said GoPro may have minimised damage done by issuing the recall when most buyers are early adopters dedicated to the brand.

"People who will see the recall are probably harder core GoPro users and to shake their trust is probably going to be a little more difficult," he said.

The company had also faced some production issues in its third quarter, which led the company to launch fewer Karma drones than planned.