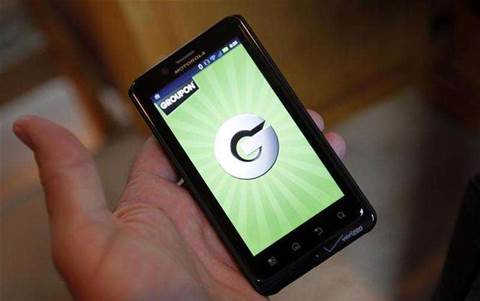 The cut in its "take rate", which some analysts had said was needed to revive flagging interest among merchants in its Internet offers, was a blow to fourth-quarter results. And a sharper-than-expected post-holiday slowdown in its new e-commerce business contributed to a disappointing first-quarter sales forecast.

The stream of bad numbers, which included a surprise loss in the fourth quarter, drove Groupon's stock down 26 percent to $4.43 in after hours trade. Overall, the company has shed more than three-quarters of its value since debuting at $20 in November of 2011.

Its current price looks even worse when compared to its first day close - the stock popped when it first  floated to over $30. Its time as a market darling was brief, however  and after just a year the price fell to only $2.60 befire staging a recovery in recent months.

"This raises questions about how these guys are going to be able to scale the business," said Tom White, an analyst at Macquarie. "The forecast is underwhelming."

Groupon is among a group of consumer-focused Internet startups that went public to much fanfare in 2011 - before losing massive chunks of market value as investors realized they had over-rated their prospects.

Within a year, Groupon had run into problems dealing with European merchants and sustaining interest among users as deals fever receded. In 2012, analysts speculated that Chief Executive Andrew Mason, known for a quirky sense of humor, may have fallen out of favor with the board.

Groupon reported fourth-quarter revenue rose 30 percent to $638.3 million from $492.2 million in the year-ago period. But it slid into the red with a 1 cent per share loss excluding items, versus expectations for a slim profit of 3 cents a share.

It forecast first-quarter revenue of $560 million to $610 million, sharply below the $650 million average estimate of analysts polled.

Chief Financial Officer Jason Child told Reuters that Groupon began sharing more money from its deals with merchants early in the fourth quarter, to persuade them to come onboard and run an offer for the first time, or work on another.

This was done selectively in the United States and in Europe, he added.

Historically, Groupon has kept about 40 percent of the money generated by daily deals. That declined to about 35 percent in the fourth quarter. Groupon then "fine tuned" take rates later in the quarter and Child said the company expects profitability to improve as a result.

"We are focused on driving growth," he said in an interview. "We will make the investments we feel we need to optimize for growth and merchant profitability."

THE GOODS ON EUROPE

Merchants have complained that Groupon takes too large a cut of online offers.

Groupon executives forecast long-term take rates of 30 percent to 40 percent for the daily deals business, during a conference call with analysts. One of the reasons Groupon reduced take rates was to create more daily deals for a new business called Local Marketplace, which launched in November.

Groupon has mostly focused on sending daily emails to customers offering vouchers for activities in their area. Local Marketplace relies instead on people searching for something to do or buy nearby, such as an oil change or a massage. By the end of the third quarter, before the launch, Groupon had amassed an online store of more than 27,000 deals for the new marketplace.

Analysts have said the move has potential because Groupon's deals may be more likely to show up in Google searches. By the end of 2012, Groupon claimed almost 37,000 active deals running in North America, and many were longer-term offers for Local Marketplace.

For now, Groupon Goods, the company's discounted product sales business, generated a lot of the fourth-quarter revenue growth, though it's seasonally volatile and generates lower margins than daily deals.

Groupon's limp outlook revived fears its business model may be in jeopardy. Chief among their concerns have been intensifying competition in e-commerce, and a struggling European division walloped by the recession there.

Executives warned a turnaround effort there would take time, and signaled that cost cuts are coming for the company's International business.

Groupon is trying to fix it by reducing the size of discounts on deals there and testing faster payments to higher-quality merchants. Technology used to automate its U.S. operations and sales efforts is being rolled out in Europe now.

Kal Raman, chief operating officer, said more than the twice the number of people are needed to handle and process an International division deal, than in the United States.

A Groupon spokesman said there are no "definite" plans for International job cuts, but there were staff reductions in the United States when the company automated.

"That is an enormous opportunity to organize Groupon's operations to be both more efficient," Raman told analysts during the conference call.