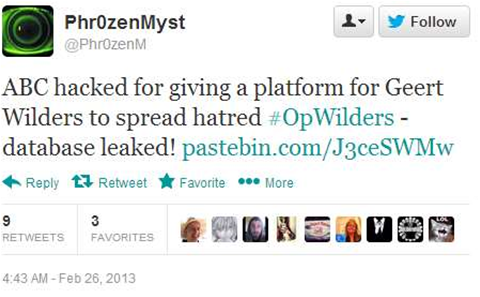 An attacker has hacked into the ABC and dumped almost 45,000 user email addresses and hashed passwords following a broadcast of an interview with radical Dutch politician Geert Wilders.

The ABC confirmed the attack, which targeted the 2010 program "Making Australia Happy" and exposed users who registered with the program's website.

"As soon as the ABC was made aware of this activity the site was shut down," Cray said.

"This breach originated at an overseas location and an activist has claimed responsibility for it.

"The ABC will be in contact with audience members who have been directly affected."

Passwords are vulnerable. While not in clear text, the details are unsalted and encrypted with SHA-1. Online services can easily reveal some passwords.

The hacker claiming responsibility said the attack was in response to an interview broadcast on the ABC's Lateline program with the right-wing Wilders. The attacker claimed the ABC gave Wilders "a platform to spread hate".