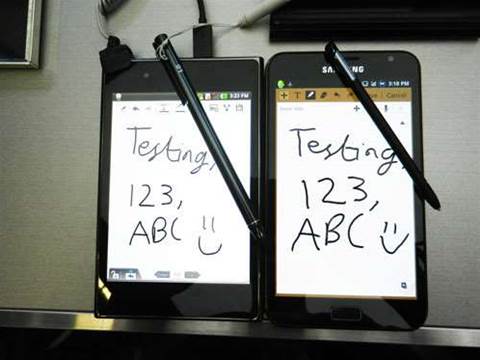 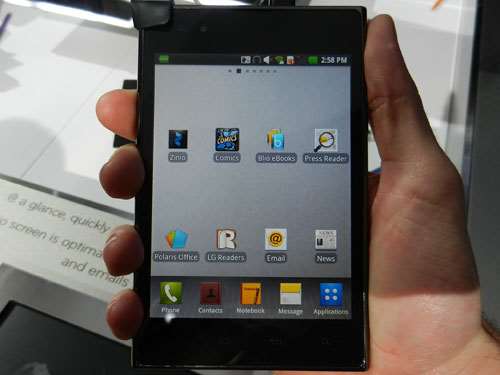 The LG Optimus Vu might not be hitting our shores any time soon, but we couldn't resist pitting it against our Samsung Galaxy Note (reviewed here) in the Stuff hands on arena. With its 5in screen, huge form factor and stylus capability, the LG Optimus Vu is the first true competitor to Samsung's monolithic Galaxy Note, so click on through to see the results of this Goliath vs Goliath battle... 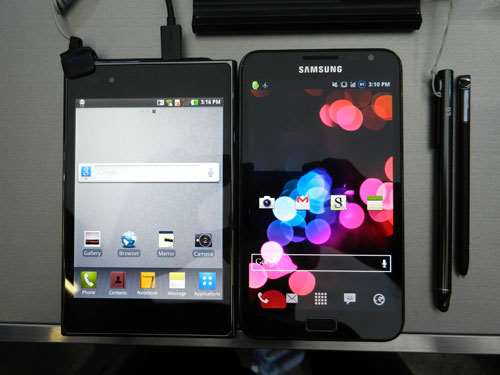 Although both phones have 5in screens, LG has opted for a 4:3 ratio for the Optimus Vu's display. LG says that this reduces wasted space when viewing ebooks or magazines, but we think they've paid a heavy price with its increased width. The narrower Galaxy Note is tricky to use one handed at the best of times and the width of the Optimus Vu rendered even our large man-hands useless when it came to one handed typing.

Tech-wise, the Optimus view is rocking a sharp IPS panel and it happily beat the Samsung  Galaxy Note in the brightness department. We also enjoyed the purer whites on the Optimus Vu's display. Overall however the Galaxy Note's Super AMOLED screen offered true blacks and more vibrant colours which we preferred, but that's just our personal preference. 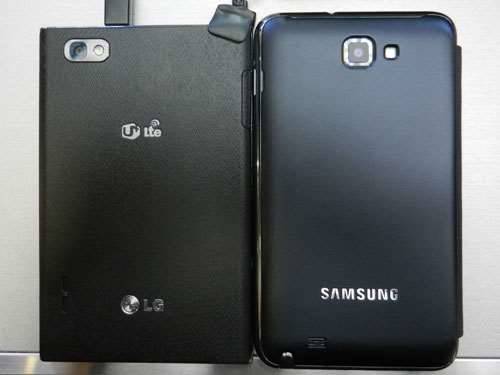 Measuring in at 8.5mm thick, the LG Optimus Vu is around 1mm thinner than the Galaxy Note's 9.7mm shell, but it's also wider and nearly as tall as its Samsung rival. Thankfully the Optimus Vu is deceptively light for its size and you can feel the difference between both phones when picking them up as the Galaxy Note is 10g heavier at 178g. 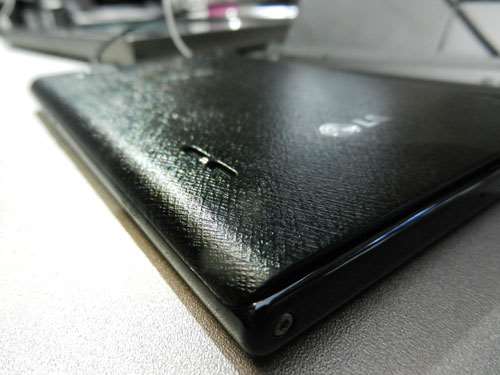 Neither phone's rear plastic panels scream out 'premium quality' like, for example, the iPhone 4S' glass back, but that's not to say that the textured rough cross-hatch backing of the LG Optimus Vu is offensive to the senses either. 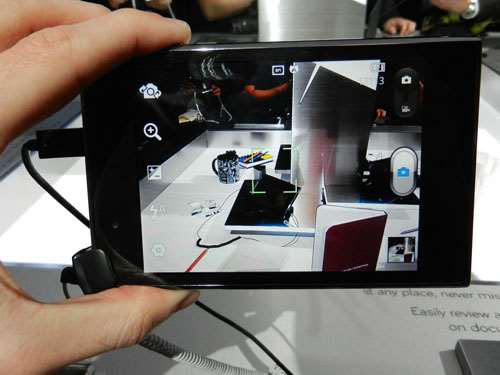 We did our best to carry out a fair camera test among the hustle and bustle of the Barcelona MWC show floor and its varied lighting. Like the Galaxy Note, the LG Optimus Vu is tricky to take photos with one-handed, but the camera app was nice and fast without any lag in between shots. 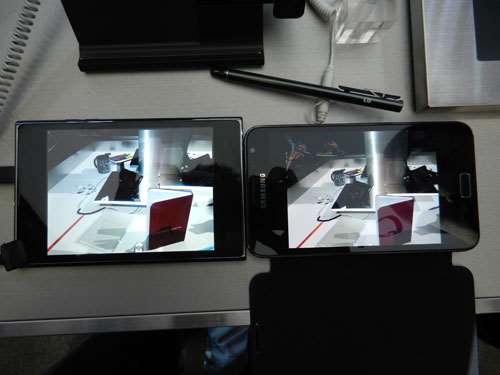 There wasn't much in it between either photo, although the Samsung Galaxy Note did seem to pick up a little more detail with the darker items on the LG show floor table. 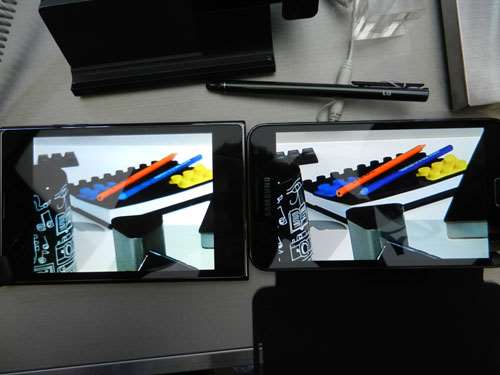 Zooming into the same part of the test photo, the Samsung Galaxy Note was the winner in terms of detail, keeping things sharper and less pixellated when compared to the same photo in the LG Optimus Vu. The Vu does still serve up a very decent camera phone experience however, and from what we saw there wasn't a drastic difference between either device's image quality. 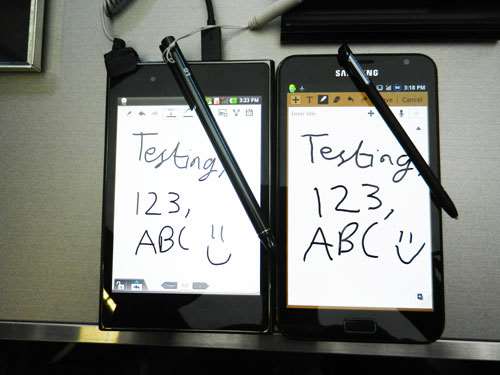 LG has opted for a much chunkier stylus than Samsung's smaller S Pen and unlike the Galaxy Note, you can't store LG's stylus in the Optimus Vu itself. Both styli feel completely different in use – Samsung's S Pen utilises Wacom digitzer technology and is very slippery on the screen which can sometimes make it hard to control, whereas LG's capacitive stylus' rubber tip offers a nice bit of resistance and a little more control.

Overall, the Samsung Galaxy Note's S Pen has more in the technology department, offering up pressure sensitivity and the ability to stow away in the device itself, but again, personal preference does come heavily into play here. We did like the resistance offered by the easier-to-grip LG stylus and both devices provide the ability to take and annotate screenshots very easily. 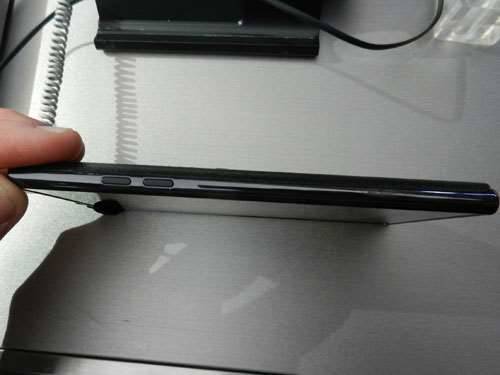 The LG Optimus Vu packs a little more firepower into its slender profile with its 1.5Ghz dual-core processor as opposed to Samsung's 1.4Ghz dual-core chip used in the Galaxy Note. In practice, both devices are zippy and can handle top-drawer games and video playback with ease. An Ice Cream Sandwich update is on the way for both handsets which should speed things up even more thanks to Android 4.0's increased optimisation. 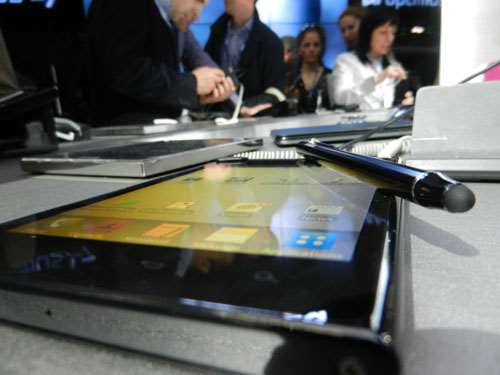 The LG Optimus Vu and Samsung Galaxy Note are niche devices aimed at people who want a bigger screen above all else. Both handsets near-enough match either in the specs and performance department and will serve to be very good portable media and entertainment devices.

It's impossible to state categorically which device is better as we've yet to properly review the LG Optimus Vu, and all of the differences – the slyli, the screen aspect ratio and the design – come down to personal preference. With the UK not expecting to see the Optimus Vu for at least a whole year though, the Galaxy Note looks set to remain the king of over-sized tabphones here in the UK for a good while yet.

Grab the MSP security opportunity
By Esat Dedezade
Mar 2 2012
8:25AM