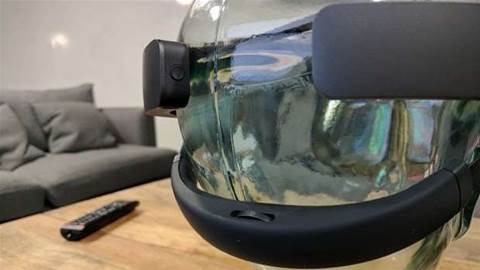 Microsoft's HoloLens headset is the company's latest moonshot; an augmented-reality device designed to overlay computer-generated digital images onto the user's vision in real-time. It's been available in the US and Canada since March, and will begin shipping to Australia this month. Last week, Alphr was invited to come and try it out.

First of all, let's get the obligatory disclaimer out of the way: this is not a consumer product. Yes, the company has shown off consumer applications, such as an augmented-reality Minecraft demo and various other games, but it's a business device first and foremost.

It's also not officially available yet. While you can pre-order a HoloLens unit, they're only development kits, intended to let software creators and companies start producing apps for the headset's Windows Holographic operating system. You'll need some serious cash to get your hands on one, too – they cost $4369 each.

However, once you actually put it on, it's easy to see where all that money's gone. While dev kits for virtual-reality headsets such as the Oculus Rift and HTC Vive looked boxy and unfinished, the build quality of the HoloLens is incredible. The headset's design and finish makes it feel like a sophisticated, premium unit – much closer to a finalised product than other early prototypes or dev kits I've seen.

It's also very well designed in terms of the weight distribution and fit. Other VR headsets have a tendency to feel front-heavy, becoming uncomfortable after long periods of use, but HoloLens uses a counter-balancing system akin to PlayStation VR. The bulk of the unit doesn't actually rest on your head – instead, it's attached to a second concentric headband inside the main body's circumference that can be adjusted to fit the user.

With that said, my unit did take a bit of adjustment, and I found ourselves repeatedly fiddling with it throughout the demo session – although this might be down to the fact that I was wearing it with glasses.

Thankfully, adjusting it is very easy and intuitive. The inner headband can be tightened with a dial on the back, while you can move the visor itself closer to or further from your eyes, and once it was comfortably seated, I didn't feel like it was in any danger of slipping off.

Rather than using dedicated peripheral devices, HoloLens features gesture and voice controls, with the primary method of interaction being the so-called “Air Tap”. Simply point the visor at whatever you want to interact with, then pinch your thumb and forefinger together to “click” it. Don't worry if that feels a bit too Minority Report for you – it also has Bluetooth support, so you can connect a keyboard for traditional input if you prefer.

Audio is provided via a built-in array of speakers, which provide positional sound based on the holographic object's location in the room. The accuracy is good, as is the volume – the speakers are loud enough to hear perfectly clearly, but not so loud as to disturb anyone else in the room.

The most impressive feature, however, is that HoloLens is totally untethered. Unlike every other high-end headset, HoloLens doesn't need a thick umbilical of trailing wires in order to function. In fact, it doesn't need to be paired with a computer at all: the unit is entirely self-contained, with all of the computation done by HoloLens' onboard “holographic processing unit”, or HPU.

This is a serious game-changer; not having to connect it to a mightily powerful PC or carve out a huge space to use it makes the HoloLens much more versatile. Because it's actually portable, employees can use it out in the field, which opens up a huge number of business use cases. 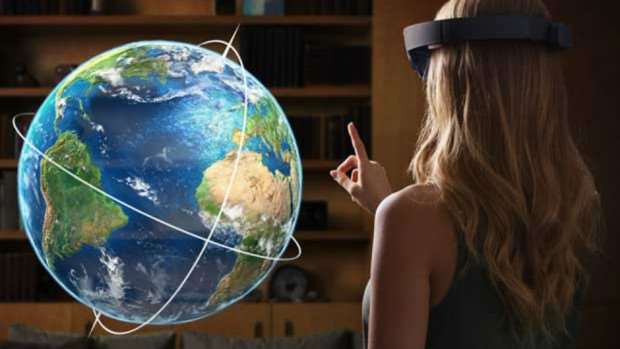 I didn't notice the device's performance stutter or struggle at any point during our time with it – although it's worth bearing in mind that we don't have a clear indication of HoloLens' processing capabilities yet, and none of the demos seemed particularly strenuous.

HoloLens does have one major problem, however, and that's the tiny field of view (FOV). While the transparent visor means you can see your surroundings perfectly, the actual frame in which the holographic content is visible is a tiny subset of your field of vision.

It's roughly equivalent to viewing a 24-inch monitor from around a metre away. This may not sound like a big deal, but when you're looking at room-scale or large-format content, it can feel like trying to watch a film through a cardboard tube. I also found that the frame's placement was a little odd – it was just above the centre of my vision, meaning I spent a lot of time with my head angled down in order to get key content into view. This could simply be an issue of calibration or headset fit, though.

The limited FOV is particularly jarring after using VR, where the user's field of vision is much closer to real life, but this is partially a problem of attitude. VR very much encourages getting up close and personal with whatever you're interacting with, whereas HoloLens works best when you step back and look at the big picture. In fact, get within about a foot of the actual image and it will disappear, as your proximity starts to interfere with the HoloLens' sensors. 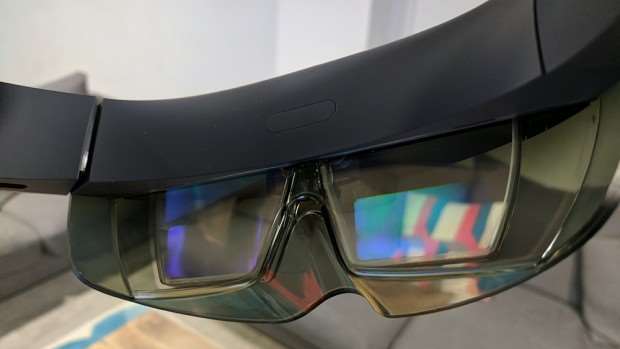 On the other hand, once you get past the issues with the miniscule FOV, HoloLens' picture quality is staggering. Given that AR is a very new field, even more than VR is, you might expect the display itself to be a little rough around the edges. You'd be wrong, though: in terms of image quality, the HoloLens is up there with consumer-grade VR headsets.

As part of our hands-on, I was taken through a couple of experiences that Microsoft has been using to show off HoloLens' capabilities. They weren't particularly interactive affairs – I was essentially just clicking through a 3D slideshow – but they showcased some of the more interesting applications.

The first demo I tried was an anatomical experience developed in partnership with Case Western Reserve University, which guided us through the body's various systems. The skeletal structure, muscle groups and cardiovascular system were all reproduced with excellent detail and image quality, including a close-up of the heart that actually let us peer inside the valves.

This type of use case is the most obvious and widely posited benefit of both AR and VR headsets – letting students and trainees get a detailed, interactive look at subject matter that would be difficult and/or costly to play with in real life. A similar application involves allowing designers and architects to visualise products and blueprints in 3D space without having to do any modelling or prototyping.

PowerPoint with a difference

A second example took me through how HoloLens can be used to create and deliver presentations, by showcasing an in-store display for a fictional watch brand. Assets could be dragged and dropped into the presentation, and there was even a virtual teleprompter to ensure that you can maintain eye contact while still having your notes handy.

You can also collaborate with other HoloLens users, who are represented by ghostly coloured figures. In a rather innovative twist, you can also see exactly where they're looking, thanks to a beam of light representing their gaze.

These collaborative uses are less commonly suggested, but for our money, they're likely to be the more useful. Skype works straight out of the box (as do all Universal Windows Platform apps), which means that any maintenance worker or engineer faced with a particularly tricky job can simply pop on a HoloLens and get advice from colleagues around the world, who get a first-person look at the problem.

Similarly, having a business meeting via HoloLens means you can bring in 3D mapping data, product and brand assets and other digital information in a way that just wasn't possible before. More importantly, it doesn't cut you off from the rest of the world, meaning you can still communicate with colleagues in the real world, and use physical tools at the same time.

Is HoloLens fit for the workplace?

HoloLens feels like something that could be very easily integrated with the workflow of most businesses, and there's a genuine value proposition there. It's certainly very impressive, as is indicated by the number of companies who are already using it. Customers include Thyssen-Krupp, Audi, Japan Airlines and many more.

However, there's one major stumbling block stopping Microsoft's AR headset from being ready for the big time, and that's the FOV. Because the rest of your vision is unobstructed, you're always made acutely aware of the limited FOV by the fact that whatever you're looking at will just abruptly end in mid-air. This can make it a frustrating experience – if only because the rest of the headset shows so much polish and potential.

Given the limitations and design niggles mentioned above, it's clear that HoloLens is still far from a finished product. I'd have liked to stress-test the hardware a little more, alongside testing how well UWP apps work – Microsoft's record with compatibility isn't exactly the best, after all.

However, based on my initial experiences, I can safely say that HoloLens will seriously shake up the future of computing. It won't replace traditional desktops any time soon, but beyond question, Microsoft has served up a slice of the future.