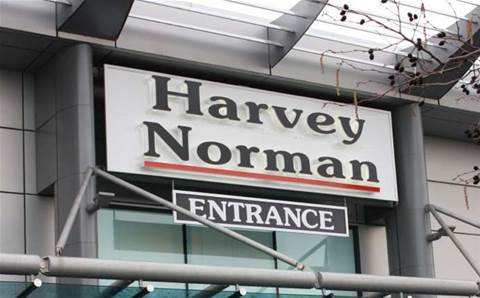 More than $700 million was wiped off Harvey Norman's value this morning as investors punished the retailer following the release of its group revenue results for the six months to 31 December 2017.

The company reported overall net profit after tax and non-controlling interests of $207.7 million, down $49.9 million (19.3 percent) from $257.29 million in the previous half-year.

Company-operated sales revenue was up 4.7 percent to $1.02 billion, while its Australian franchisee sales were up 4.8 percent to $3 billion.

In an announcement released on the ASX, the company noted its sales made by franchisees in Australia did not form part of the financial results of the consolidated entity.

Harvey Norman has been under pressure from shareholders and the corporate regulator the way it handles its network of franchisees.

The Australian Shareholders Association, which seeks to represent independent, retail shareholders, called for chairman and co-founder Gerry Harvey to step down.

The company has faced calls to consolidate its franchisee accounts with its group accounts, and to provide greater clarity in regard to the financial support it provides to franchisees.

ASIC in November 2017 dropped a probe into the electronics retailer, which admitted earlier this year that the corporate watchdog was looking into how the company accounted for its franchises, in particular, whether the accounts of franchise stores should be consolidated.

While heaquartered in Australia, Harvey Norman's network of hundreds of franchisee stores spans eight countries, including New Zealand, Singapore and Malaysia, Ireland and Northern Ireland, and Slovenia and Croatia.

Harvey Norman chairman Gerry Harvey said in a statement to the ASX: “We’re very much focused on raising the bar of our retail experience, and this period has seen a concerted focus toward completing our flagship store strategy by the end of the 2018 financial year.”

The half-year report comes as the retailer topped NSW Fair Trading's first complaints register of 2018, with 39 complaints recorded throughout January.

Fair Trading commissioner Rose Web said there were 22 businesses featured in the most recent register, with 431 complaints between them.

“This represents a significant rise in the number of complaints compared to last year’s January register, with 332 complaints for the same number of businesses,” she said.