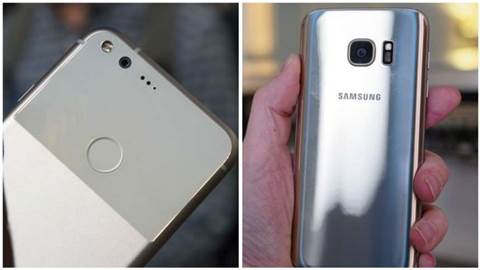 The Nexus is dead, long live the Pixel!

That's right: Google is no longer outsourcing its handsets to LG and Huawei. And its first two offerings – the Pixel and Pixel XL – look like being the stuff of smartphone dreams, albeit expensive dreams.

But where does that leave 2016's other big hitters? In terms of glowing reviews and strong sales, it's hard to look past the Samsung Galaxy S7. Is Samsung's flagship going to be crushed by Google? Let's find out…

Both the Pixel and the Galaxy S7 are pricey smartphones, and if that kind of expenditure makes you feel uneasy, you can at least comfort yourself with one thing: you'll get a good looking device.

Both handsets are a beautiful combination of metal and glass and are in the same ballpark size wise, at 5in and 5.1in respectively. While the Samsung Galaxy comes in black, gold, white, silver or rose gold, Google gently prods at the pomposity of rival manufacturers' grandiose colour titles with the more straightforward “quite black”, “very silver” and “really blue”.

Two more things to note from the outside. Firstly both phones have fingerprint security, but they're located in totally different places. While Samsung opts for home button security on the S7, Google is placing theirs on the back of the handset – so it's a question of whether you prefer to unlock with your thumb or your index finger.

Secondly, Google incorporates a USB Type C charging port into their handset, while Samsung sticks with micro USB – probably for the last time, given the Note 7 has abandoned it. Whether this is a win for either depends on whether you value the faster speeds of the newer port over the convenience of micro USB cables being literally everywhere.

Me? I can't decide overall, so I'm calling this one a draw.

Thankfully, this category is a little more clear cut… at least on paper, anyway. I should caveat this section by saying that there's more to screen quality than just resolution, and our review will get to the bottom of screen quality when we can put the Pixel properly through its paces.

That said, on paper, Samsung clearly has the upper hand here. 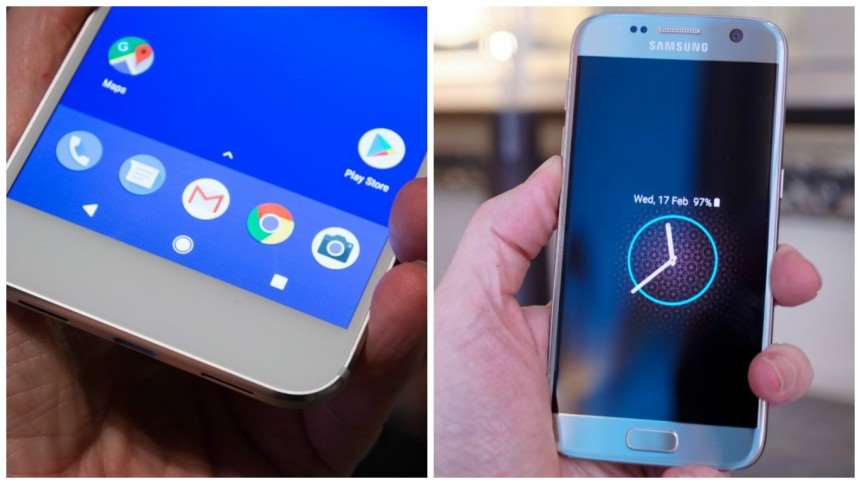 Now it's important not to overstate that, given most people will find a 1080p display fine on a screen of that size – hell, most of our TV sets are still 1080p and we cope fine with those. However, if you're interested in VR – either with the Samsung Galaxy Gear VR or Google's upcoming Daydream – then this stuff matters a lot more. In short: virtual reality involves having a screen magnified very close to your eyes, and under this kind of scrutiny, every pixel matters.

That means that this round goes decisively to Samsung unless Google really manages to surprise us when we get our review Pixels in. But given Samsung make some of the best screens in the business, colour me doubtful.

Performance is quite a bit stickier, and requires a little bit more speculation. This is complicated by the Samsung Galaxy 7's chipset varying, depending on where you bought it. If you bought it in the UK, your chipset will be Samsung's own octa core 2.3GHz Exynos 8890 chip, but if you're reading this in America, you'll have a nippy quad core 2.15GHz Qualcomm Snapdragon 820. That's the same chip found in the HTC 10, LG G5 and OnePlus 3, so it's no slouch either.

The Google Pixel gets a slight boost on the latter chipset, packing a Qualcomm Snapdragon 821 processor that promises a 10% boost on its predecessor. As we haven't had any handsets with this chipset in yet, it's hard to validate these claims, but it's likely the Pixel will be very snappy indeed. 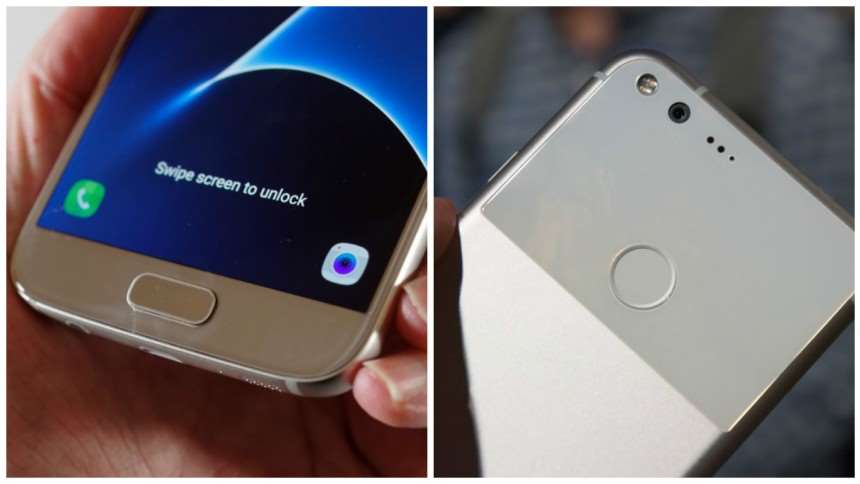 Both handsets are backed up with 4GB RAM, so a dead-heat there.

If I were a betting man, I'd give the Google Pixel the slight edge: not just because of the advances of the Snapdragon chipset, but because Google hardware combined with Google software is a recipe for buttery-smooth operation. But we won't know for sure until we get one down in the labs.

This is another section where it's impossible to say for sure.

We could look at the Samsung Galaxy S7 and Google Pixel batteries side by side and say objectively that the S7's is larger. And that's true: it's 3,000mAh to 2,770mAh – but it doesn't tell the full story.

Software is a little bit more speculation based, but basically the argument goes like this: Google makes Android, and therefore any hardware it makes can naturally take advantage of the (newer) version of the operating system.

Given the Google Pixel uses a newer version of the S7's (American) chip, it's very likely that it'll have similar, if not slightly better, battery life. But as this is speculation for the moment, I'll hedge my bets.

I briefly mentioned Android there, and the advantage Google has by creating both the hardware and the software. Historically, Nexus devices have been first in line for Android updates and security fixes, unencumbered by the need to ensure device compatibility or carrier approval. This continues with the Google Pixel, which ships with Android N from its release date in November. 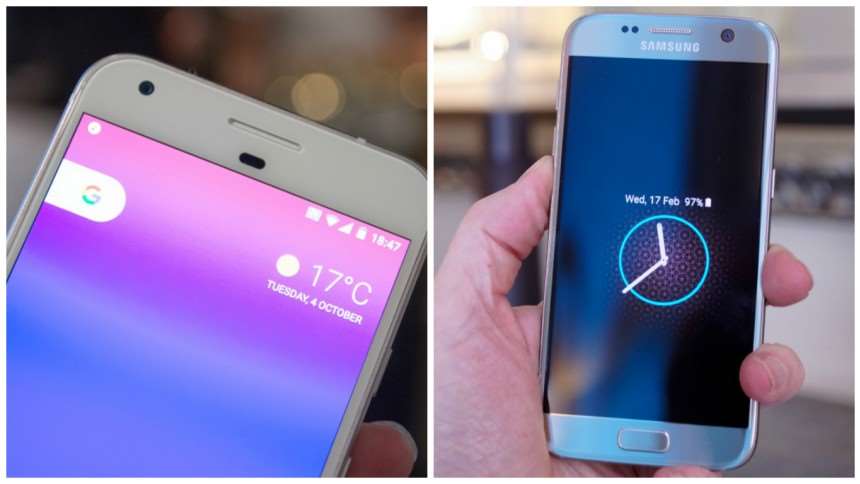 The Samsung Galaxy S7, however, is stuck on Android Marshmallow, with no current ETA on that sweet Android Nougat patch. Historically, Samsung isn't the fastest to update their myriad handsets, so we're betting on spring 2017.

Either way, the S7 doesn't have Android N right now, so Google wins out of the box.

It's always hard to judge a phone that we haven't been able to thoroughly test yet – and especially when it's made by Google, who know a thing or two about getting the most out of Android, but anyone sitting on the fence between the two handsets should feel confident in biting the bullet and purchasing a Samsung Galaxy S7 now. Not only does it have a higher resolution screen and similar specifications, but it's considerably cheaper. I'd be very surprised if the difference in specs manifests itself in a dramatic leap forwards.

There are reasons to hang on for the Google Pixel, of course – especially if you're the kind of person who wants the latest version of Android first. It's also going to be the first phone to run Google Daydream – the company's dedicated virtual reality application. It requires dedicated hardware, so the S7 will never get it – although it does, of course, have the Gear VR if you want to get hands on with virtual worlds. 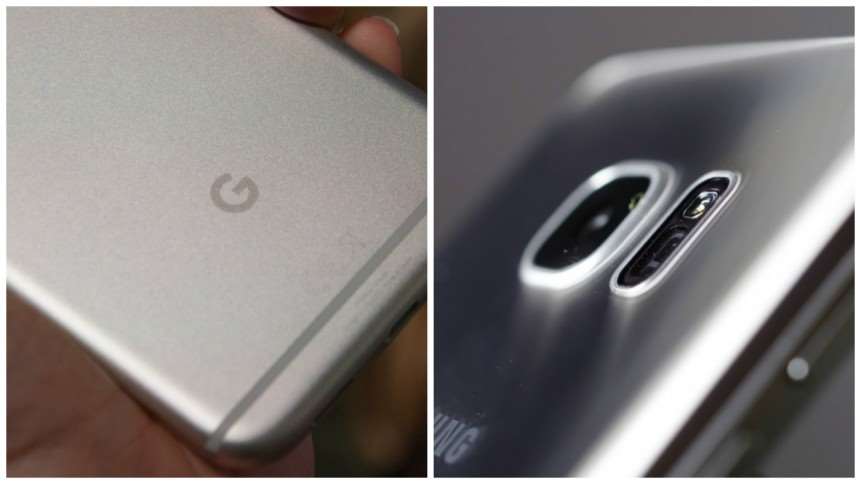 It's likely you won't be disappointed with either, but we won't know for sure until we get our Google Pixel in for review – so keep an eye out over the coming weeks for our full, in-depth assessment closer to release.