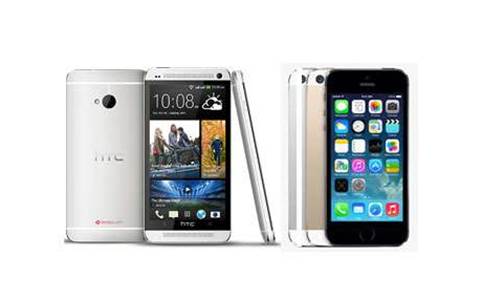 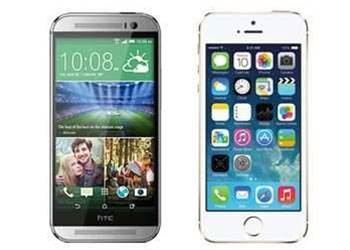 While iPhone sales still represent a majority of Apple's revenue, the company has been steadily losing share of the smartphone market, mainly to devices running Android. Among the latest devices to seek a bite of the Apple is a new version of the HTC One, which hit the street on April 7. Here's a look at the HTC One M8 vs. the Apple iPhone 5s. 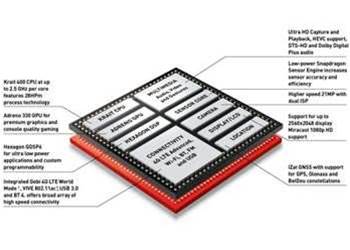 There's still no match anywhere for Apple's 64-bit A7 processor, operating system and apps. But HTC does well with Qualcomm's new Snapdragon 801 SoC (pictured), which it unveiled earlier this year in Barcelona (it's also in Samsung's Galaxy S5). The 801 is a 32-bit quad-core processor running at 2.3GHz with 2 GB of RAM, double that of iPhone. The iPhone is sold with 16, 32 or 64 GB of storage; HTC One offers only 16- or 32-GB models, but its microSD card slot can add 128 GB and file I/O, anathema to iOS devices.

Apple's A7 SoC includes a Series6 GPU from Imagination Technologies, which multiplies graphics performance by as much as 56 times the original iPhone, Apple says. The Snapdragon 801 employs an Adreno 330 GPU, which doubles performance of the Adreno 320 found in the prior HTC One (model M7). Adreno 330 also supports OpenGL 3.0, DirectX and other modern graphics APIs, as well as FlexRender, an emerging distributed rendering architecture standard used for displaying highly complex and realistic ray trace images on commodity hardware.

The HTC One employs 802.11ac. The iPhone 5s does not. Approved in January, 802.11ac once it proliferates through the infrastructure will permit Wi-Fi speeds approaching 1 Gbps. Both devices also include Bluetooth 4.0, dual-band Wi-Fi a/b/g/n and 4G LTE. HTC One adds NFC and DLNA for streaming media to compatible displays and other devices. Apple supports AirPlay, a proprietary streaming protocol; the company does not support NFC in any of its devices. 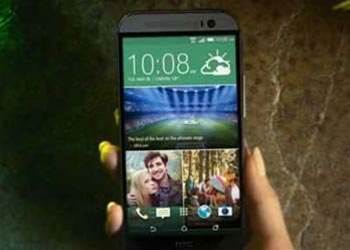 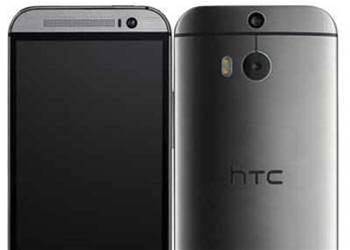 With the philosophy that bigger pixels make a better picture, Apple has replaced the 8-megapixel main camera sensor of prior models with an 8-megapixel camera with 1.5 micron pixels. It kept its great optics and software. HTC's camera pixels are even bigger, but there are less of them. The M8's camera offers 4.1 million pixels that are 2.0 microns in size. HTC also claims that dual sensors in its camera allow it to refocus an image after it's been captured. Sensors in both devices spread their pixels across a third of an inch. Apple's aperture is f2.2; HTC's is f2.0. Both companies claim to capture 1,080p video at 30 fps. 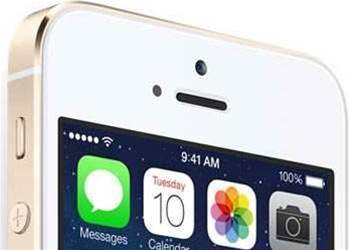 Apple and HTC both pack the standard set of sensors: accelerometer, proximity, ambient light and gyroscope. HTC also includes one for reading barometric pressure. Apple integrates a fingerprint scanner and a back-light sensor to help with photography. Both also have GPS, GLONASS and digital compass location capabilities. Apple stands alone with its dedicated M7 motion processor and CoreMotion API.

Next to the 5s, the HTC One is huge at 5.8 inches long x 2.8 inches wide. That's almost a full inch longer than Apple's 4.9-inch length and a full half-inch wider than its 2.3-inch mid-drift. The HTC One also is a good bit fatter and heavier than 5s, in part because of its curved, all-metal enclosure. The HTC One spreads the micrometer to 0.37 of an inch and tips the scale at 5.6 ounces; the 5s measures just 0.30 of an inch thick and weighs roughly a comparatively feathery 3.95 ounces.

There's a good reason that the HTX One's length rivals that of a graphing calculator, and it has nothing to do with math. Built into the unit's upper and lower edges are front-firing speakers that make most any smartphone sound like a kazoo. 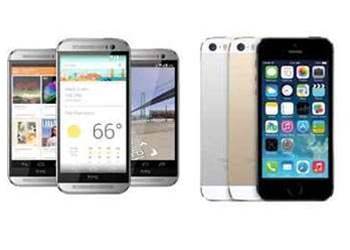 The iPhone 5s runs iOS 7, the world's first and still the only 64-bit mobile operating system, plus 64-bit versions of all apps, libraries and drivers. The HTC One runs the mature and refined Android 4.4.2 Kit Kat plus version 6.0 of HTC's good-looking and customisable Sense UI overlay. Both platforms offer countless apps, and power efficiency that seems to get better with each passing day. The iPhone 5s has been available since September with outright pricing from $869. The HTC One began shipping in April, and has an outright price of $899.