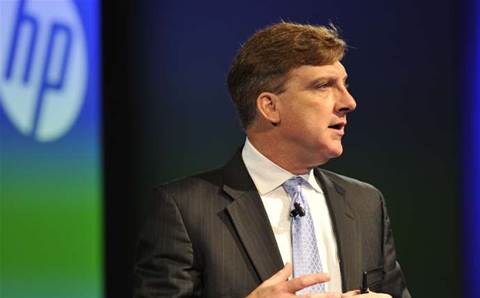 "What is not practical about having a system that gives you fluid pools of compute, storage and fabric, that enables you to stand up infrastructure for a workload in three minutes or less?"

Miller was responding to a blog post by Dell fellow Robert Hormuth, office of the CTO, that "composable infrastructure isn't a practical solution – yet". While the blog didn't specifically name Hewlett Packard Enterprise, HPE and its Synergy technology were clearly the target.

Synergy is being hailed by partners as a breakthrough that leapfrogs Dell and other IT infrastructure competitors.

Miller compared Dell's response to HPE Synergy as a "FUD" (Fear, Uncertainty, and Doubt) tactic aimed at hiding Dell's failure to innovate beyond a jumbled, bric-a-brac approach to next-generation architecture.

He said the Dell blog was tantamount to a child "in trouble" attempting to distract a parent by pointing to something else. "These are all distractions versus stating a clear strategy for the future," Miller said.

The HPE Synergy architecture was announced Tuesday US time and is being billed as the first ever to bring software intelligence to compute storage and fabric with fluid resource pools.

The technology is being demonstrated to more than 13,000 customers and partners in the HP Composability Zone at HPE Discover, running with third-party offerings including VMware, Docker and Microsoft SQL Server on bare metal - all in the same infrastructure, composing and recomposing in fluid pools.

"Every customer I have talked to here is saying this is ground breaking," said Miller in a phone call from London. "What's not practical about having a template that not only delivers compute storage and fabric but the OS Image? We are delivering the customer a practical solution that enables them to run all their workloads in an optimised way on this infrastructure. Dell's approach is, it is not practical yet, just stick with workload optimised solutions."

HPE Synergy is a "very practical solution" with "real world" implications to solve customers' problems today, including dev-ops integration with cutting edge tools like Chef, Docker and Ansible, asserted Miller in his no-holds-barred response to Dell.

"At Dell, while we’re certainly committed to future IT, we’re keenly focused on solving immediate customer problems tied to workload optimisation, and composable infrastructure hasn’t achieved that," Hormuth said in his blog. "Our aim is to be the leader at solving customer problems in modular, cost-effective and immediately impactful ways that remain relevant far into the future."

Miller called those Dell offerings a totally disjointed jumble that comes up short compared to HPE Synergy, which has been in development for the the last three years at a cost of hundreds of millions of dollars.

"Dell doesn't have a composable infrastructure," he said. "They just don't meet the requirements of composability - the fluid pools, the single programmable API and the software intelligence. They are probably trying to FUD it. They are spewing out multiple, different solutions that are all disjointed."

Hormuth also claimed that current composable infrastructure technology is not based on open APIs.  "Right now, most approaches to composable infrastructure are being driven by a single company," wrote Hormuth in the blog, in a clear reference to HPE. "They’re not open – so they lack the flexibility and choice we advocate. Hopefully, they’ll become open so customers have more freedom."

Miller said claims that Synergy is not open are simply false.  In fact, he said, there are 20 partners at Discover that have already integrated with Synergy. What's more, there is support for multiple hypervisors including those from VMware, Red Hat and Microsoft.

Even networking high-flier Arista has integrated with Synergy, said Miller.

"The API is up on the website for anyone to use," he said. "We have software development kits. We didn't do any work with Arista. Arista went and downloaded the API, did the work and developed it. We are very open. I haven't had one customer tell me that this is not open. You can hook up third-party storage to our solution – and it can be made decomposable when the vendor writes to our API."

HPE CEO Meg Whitman, for her part, has called Synergy the biggest breakthrough at the company in the last decade. Whitman, in fact, has been cheered by partners for pushing forward with the HPE investment after former CEO Mark Hurd, now co-CEO of Oracle, cut critical research and development projects.

Miller said HPE's Synergy is a breakthrough leadership moment for the newly independent company at a time when competitors are simply not innovating at the same pace as HPE.

"We are taking the initiative," he said. "We are not waiting for the industry to say here is a composable API. We are saying here is the composable API which is compliant with open standards like Redfish and OpenStack. We are moving the industry forward, not throwing out a bunch of jumbled stuff that is going to confuse customers."