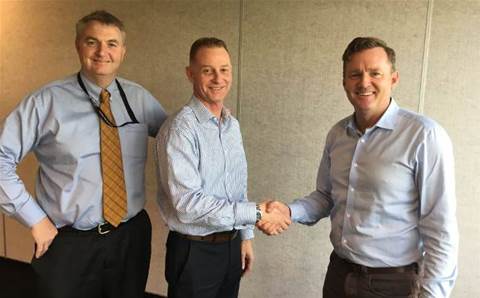 Hitachi Data Systems has announced a partnership with German-headquartered video solutions vendor Geutebruck as it moves to target specific verticals through multiple partnerships.

Both resellers are existing Geutebruck partners that are starting new relationships with HDS.

STS was founded in 2004 and operates from offices in the Northern Territory, South Australia, Western Australia and Queensland.

The company is promising a solution that will help airports and retail stores benefit from video analysis.

This is a public safety focused partnership, according to HDS, which marks the evolution of the company's partner network into the new direction of video visualisation.

Keith Roscarel, HDS's director for public safety and smart cities Asia-Pacific told CRN: "We’re in position where we can deliver today an integrated public safety solution that can apply the benefits of video analysis to retail, airports, as well as the protection of public assets, where the video component is part of a much bigger picture. This can be augmented with the value of our Hitachi consulting arm to deliver deep industry experience and expertise."

Geutebruck chief executive Anthony Brooks explained to CRN that surveillance systems were among the world’s largest consumers of storage and compute.

"When combined with Hitachi Data System’s virtualisation platform we can create many efficiencies.  This new strategic partnership goes beyond that of physical ‘system’ efficiencies where we also explore the analytical benefits in the use/consumption of this data and further analyse this information from the edge," Brooks said.

Geutebruck and HDS have several clients in common in government and enterprise and have worked together for years before formalising this relationship.

"In Australia and Asia-Pacific, we are leading the world in virtualised surveillance solutions, especially as we have seen the acceptance and maturity of IP high-definition video systems," Brooks added.

Hitachi Data Systems Australia and New Zealand industry and alliance solutions director Phil Teague told CRN: "The agreement with Geutebruck is a foundational partnership that has been incubated here in Australia. We are targeting opportunities outside our traditional IT market to deliver business outcomes as enterprises are advancing their digital transformation."

According to Teague, HDS now has the ability to deploy video, extract the intelligence and analyse data sets for a variety of use cases.