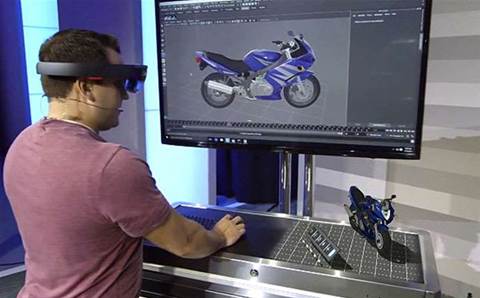 Microsoft wowed an amphitheatre of more than 10,000 partners by demonstrating how its HoloLens technology could impact business customers.

It's no overstatement to say many audience members at the keynote – on the first morning of Microsoft's Worldwide Partner Conference in Orlando – were awestruck as presenters showed off the 3D headset.

A special camera rig mimicked the HoloLens projection on the big screen to illustrate to the audience how the headset looks to the viewer. 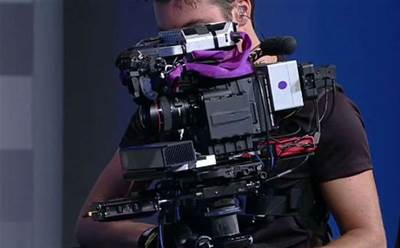 The demo, led by HoloLens team members Lorraine Bardeen and Dan McCulloch and centering on motorcycle design, included several "wow" moments, including McCulloch moving the mouse cursor off the screen to interact with a miniature holographic model. 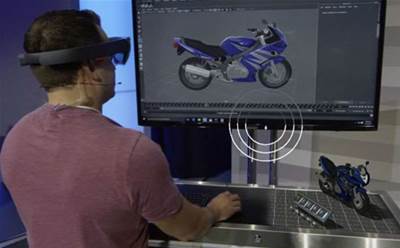 The demonstration also touched on the augmented reality possibilities of HoloLens by adding holographic bodywork to a real, physical motorcycle on the stage. 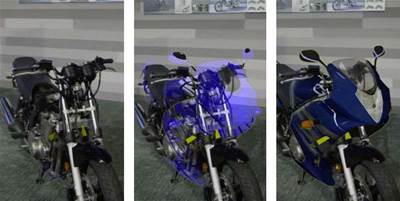 McCulloch also looked at how HoloLens could be combined with Microsoft collaboration technology, overlaying visual "annotations" and the virtual avatar of a remote collaborator on the physical motorcycle. 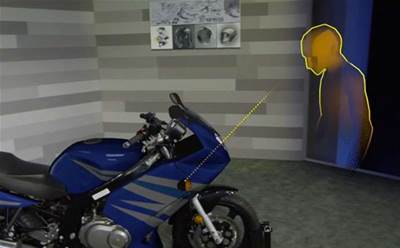 HoloLens most recently impressed punters at the E3 gaming event, integrating the technology with Minecraft, the wildly popular video game that Microsoft purchased for US$2.5 billion last year.

HoloLens is still very much a preview, with no shipping dates revealed and only a few reviewers given a chance to try out the device. None of the senior Microsoft Australia staff CRN spoke to at WPC had been hands on with the headset.

Unlike E3, in Orlando Microsoft was illustrating the business-to-business opportunities for holographic technology. "What I am enjoying, as we show different use cases for HoloLens, we are getting past the cool factor," said Philip Goldie, Microsoft Australia director for partner business and enablement.

Application specialists from the Australian channel told CRN they were blown away by the demo, and are already conjuring use-cases for the kit.

Graeme Strange, chief executive of Readify – Microsoft's 2015 Australian partner of the year – told CRN that the HoloLens demo "feels like the future is here now and holographic tech is now a reality and not something out of a sci-fi movie".

"The adaption for the presentation via the TV makes it look even better because it doesn't restrict the peripheral view as much as the device does, however, giving credit where it's due – when Microsoft claims it's now cool then this is definitely the technology that would make that undisputed."

Strange reckons Melbourne-based Readify could take advantage of the HoloLens platform once it is opened up to partners. "The core of the hologram is an application, ie every hologram is an app. Software developers can go nuts building holographic applications by just learning [gaming development platform] Unity.

"It's not that hard for the developer, and our guys have already started teaching themselves. The only other skill – other than subject matter expertise – is 3D modelling. With our recent part-acquisition of Folk, we see the access to these skills coming from these designers. It's not hard to see that Readify is perfectly placed to deliver on HoloLens enterprise applications," said Strange.

The boss of another award-winning Australian Microsoft partner, Nicki Page, chief executive of newly formed MOQdigital, called HoloLens "one of the major highlights of the keynote".

Page said it "really shows the quantum leap technology has taken with the HoloLens".

"I’d like to think we can save lives or change the healthcare world with the HoloLens – for example hook it up to 3D printing of hearts or other organs for transplants.

"But reality is we’re still a way off this and will be used more for research and development until industries gain more confidence with the technology. Clearly the demo in the keynote today showed the impact it could have on the manufacturing world. Custom-made motorbikes are now a hologram away!" said Page.

Sean Bishop, general manager of sales and marketing of Sydney-based managed service provider Harbour IT, was blown away by the demo, and could envisage enterprise applications for HoloLens.

"I do a lot of with the auto industry; I manage a V8 supercar driver. The industry is always looking for that hundredth of a second and when I look at what I saw today, I see aerodynamics. If all the motor racing manufacturers had that tomorrow, they would be blown away," said Bishop.

Steven Kiernan is a guest of Microsoft at Worldwide Partner Conference.