How PC rivals will fight for Windows 10 supremacy 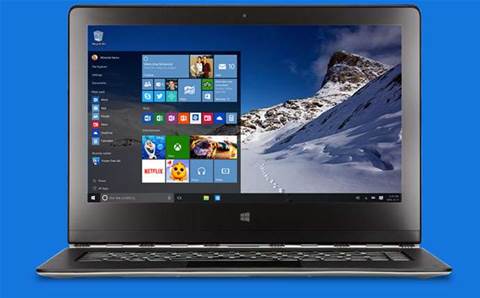 Top PC vendors have revealed which devices would be Windows 10 ready, with the launch of Microsoft's latest operating system coming on 29 July.

There has been some anxiety in the channel about the automatic upgrade feature in Windows 10 cutting out the need for customers to seek support from resellers. However, many Australian channel executives were excited about Microsoft's new OS back when the major bells and whistles were revealed in January.

The world's biggest PC manufacturers have now told CRN of how they are preparing the market for the landmark release next month.

HP confirmed that all its current Windows-based computers would be offered an upgrade to Windows 10 next month.

"As a result, customers who purchased or plan to buy a 2015 Windows PC from HP should have a smooth transition to Windows 10."

The vendor revealed that its Pavilion x360 and Spectre x360 convertibles, Pavilion and Omen notebooks, and the EliteBook 1020 Folio will all support the Cortana voice assistant, a new feature on Windows 10.

The EliteDesk 800 desktop mini PC and ZBook 14 and 15u ultrabooks can take advantage of the 4k display scaling feature of the new operating system.

[Related: What you will lose in Windows 10]

Dell told CRN that it will also have Windows 10 devices ready on 29 July.

"The systems available for purchase with Windows 10 on day one will include mainstream Inspirons, industry-leading XPS and business Latitude laptops," said a Dell Australia spokesperson.

The vendor is working with Microsoft and its "major retailers" to have reseller staff trained for Windows 10, as well as "working with retail partners on advertising and marketing efforts for launch, and the three to four weeks to follow".

"At the moment, Dell is focused on promoting the upgrade effort and how easy it will be to upgrade to Win 10 with Dell," said the spokesperson.

"Dell.com will launch its Win 10 campaign beginning 29 July, and Dell customers will be the first to get the most from the new features of Windows 10."

Next: Toshiba, Acer and Lenovo

Grabbing the hybrid cloud opportunity with Lenovo and Azure Services
By Tony Yoo
Jun 12 2015
5:21AM