How Telstra partner Calibre One saved Halkitis 52,000km a year 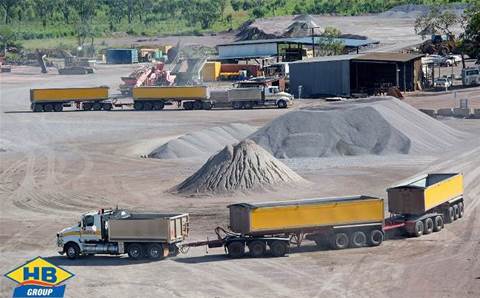 It's no secret that lack of access to high-speed broadband can choke businesses in rural and regional Australia, but the data journey for Halkitis was particularly slow – a 200km round trip to drop files off at head office.

Halkitis – the largest producer of concrete in the Northern Territory – turned to Telstra partner Calibre One to resolve its network nightmares.

Despite deploying communication technologies to interconnect its manufacturing plants, Halkitis' two offsite quarries are more than 100km away from the company's head office in Darwin.

Struggling with an ageing network, staff struggled to transfer large data files and reports to head office each day. The only way to report back to Darwin was to make the 100km drive each way to physically transfer the data, adding over 52,000km in travel a year.

On top of that, three of Halkitis' sites are located in areas of the Territory that run connectivity over copper services vulnerable to lightning strikes and pits flooded by storm water.

Halkitis had been running an ageing Telstra MPLS network at its two main sites, and NextG service at its other locations. The head office was connected with multiple ADSL connections, with the other main sites acting as a dedicated gateway for specific sites.

The company was also using and Telstra IPVAS 50m firewall with a small allowance of data for email and traffic.

To remedy the issues, Telstra introduced Halkitis to Northern Territory-based partner Calibre One. The two companies set out to deploy a new network with Halkitis, including Cisco routers and a new firewall.

The MPLS network was replaced with a new network built off Telstra NextIP and Internet Direct technology using Telstra and NBN fibre for all major sites.

Cisco 4321 routers were deployed, replacing the Cisco 1800 Series routers at the main site and Cisco 887 at all other sites. A new Cisco Meraki security appliance was also installed at the head office.

With new Meraki MX84 appliances, Halkitis' IT team can govern internet bandwidth and implement control policies through a dashboard which helped identify and locate problems.

Commander Centre Darwin had recently deployed a new Samsung IP phone system so working with Calibre One, Halkitis' customers were transitioned from PSTN lines over to new Telstra SIP services.

Not only did Halkitis reduce its overall spend on communications, but the new network also eliminated the need to drive between locations.

"It is hard to think that prior to this network project, we put up with having one person drive over two hours a day and 52,000km per year just to deliver a set of reports from one of our regional locations to head office," said marketing and IT manager Mehdi Ghaffari.

"Calibre One and Telstra together successfully rolled out fibre to all our core sites, they have given the IT team visibility and importantly control over all web-based traffic and significantly increase speeds across our internal network and to the internet benefiting local and our remote users."

If you would like to enquire about tickets to the conference or awards, please contact CRN Events - crnevents@nextmedia.com.au
Got a news tip for our journalists? Share it with us anonymously here.