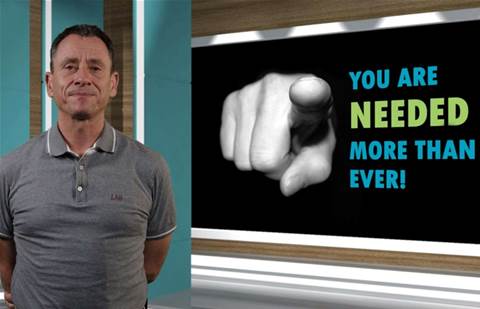 'Partners are needed more than ever’, was one of the resounding messages sent to the APAC channel by Canalys chief executive Steve Brazier this week, after the global analyst firm summed up the channel’s role in 2020 and predicted some important industry shifts and opportunities ahead.

In his keynote presentations for this year’s Canalys Channel Forum APAC, delivered digitally, Brazier reflected on the extraordinary year that was 2020, covering topics including industry winners and losers amid the pandemic, global market trends, and of course how technology and the channel performed.

While it was feared earlier in the year that the impact of the coronavirus would be similar to that of the global financial crisis, Canalys was pleased to report that the technology industry as a whole actually grew about 4 percent in the APAC region, not including China.

Far from the worst-case scenario, the channel across the region, Brazier reported, came out relatively flat year on year, with distribution revenues down about 2 percent and partners having grown 1 percent. The technology market cap was also looking particularly strong.

“The market cap of the tech industry has been absolutely phenomenal,” Brazier said. “Up some 39 percent in the first three quarters of this year, with many winners in the category including companies like Zoom, as well as companies like Apple, Microsoft, Amazon and Google all doing exceptionally well.”

Technology has indeed been one of the winners of the pandemic as customers look to partners to help them adopt new working models. Government spending has also been key, Brazier said.

“Government spending has been very important in terms of big contracts and big technology wins, large corporate has been OK, but we’ve really seen a hollowing out of the spend in many countries around SMB, and as a consequence of that the big resellers, the big channel partners, have been growing faster than the smaller ones,” he said.

There’s also been a surprise in the volume distribution sector, Brazier added.

“For years distributors have been trying to go up the value chain, add more value, add more services, sell  more sophisticated product and try to get those wafer thin margins up a little bit,

But of course what's happened this year is in volume distribution, selling kit has outperformed selling infrastructure in particular,” he said.

“There's been a huge boom in selling kit, and to the surprise of many distributors the best performing part of the business has been that volume kit. Even more positively it’s often been at higher margins than normal because the products have been in such demand, there’s been no need to run promotions, there's no need to worry about excess stock, many products have been sold out in fact. So it’s been a very good year for the volume distributors, better than the value-added distributors in the region.”

Brazier went on to highlight how strong a year it was for PCs.

“Some 10 years ago, many commentators were writing, ‘the PC is dead‘, ‘the PC will be replaced by the smartphone’, well actually this year it's been tough for the smartphone industry and the PC industry has been absolutely phenomenal,” he said.

“I’m proud to tell you today that this year will be the most profitable year ever for PC vendors, they’ve having an absolutely fabulous time, driven by the work at home and study from home trend.”

In APAC but not including China, the PC market in the third quarter of 2020 grew 14 percent according to Canalys, and in greater China, growth was about 11 percent.

Brazier said while one of the obvious drivers was that every company dependent on desktops had to overnight enable a remote workforce and provide a laptop to every staff member, Canalys believes something even more fundamental helped spur growth in PCs.

“Employees had to work at home, students had to study at home, everybody was at home wanting to work or study at the same time, they could not longer share one PC, they needed one PC each,” he said.

“We’ve also heard of some companies sending some employees home knowing they wouldn’t see them for a few weeks or even months, perhaps knowing that PCs were in short supply and saying, ‘Don’t take one PC with you, take two!’ One for day to day working, one for special projects, or one running Linux and one running Windows.

“It was cheaper to give them two PCs than to worry about employees not having a PC and not being able to work at all.”

Anything with a keyboard

Brazier briefly touched on the processor market, noting it had remained highly competitive, with AMD continuing to grab Intel market share and ARM making a good showing in 2020 with both Qualcomm and Apple taking advantage of the technology.

“Intel’s ownership of the PC industry has gone, they’re significant under pressure, and you can educate your customers about the choices they face,” he said.

It’s not just in processors that customers had a wider choice, Brazier added, but also in operating systems too, with Chrome, Windows, OSX and Linux all sought after.

“There’s been such a strong demand for the last 12 months that we met some companies saying they needed to buy up to 30,000 notebooks. Partners responded and asked, ‘Which processors do you want? Which OS do you want? Which brand do you want?’ and the customer said, ‘We don’t care. Get me anything with a keyboard’.”

From the customer perspective, Brazier said, what mattered most was who could deliver.

Looking at Canalys data from Q1 2020 to Q3 2020 in APAC, Canalys' CEO also summarised the clear winners in some specific technology categories.

“There also have been losers,” Brazier said. “Office networks, there’s simply been no expenditure there, that’s hurt Cisco, it’s hurt Aruba a little bit as well. Likewise with wi-fi.,” he said.

“The networking industry has been slow, storage and on-premises storage and servers have been difficult as many of those projects have been delayed, there’s not much point upgrading your data centre if your staff aren’t allowed in the data centre. Plus if times are tight and things are uncertain, it’s easier to delay that replacement cycle by another year.

“Some of that business should come back in 2021, but some of it has been lost to the public cloud forever.”

Partners needed more than ever

While Brazier’s keynote covered a several further topics around the state of 2020 and the challenges it will continue to face, including the importance and strong continued uptake of security, stock shortages due to manufacturing and importation costs, and the considerations companies will be making as staff return to work, one thing remained a constant.

The message delivered was that in each aspect of industry change and recovery, the channel and channel partners would be needed.

That’s because, according to Canalys, verticals including eCommerce, health, education and other government agencies have all thrived or needed to thrive during 2020, and the opportunities for partners to be trusted advisories in these industries are plentiful.

From delivering better telehealth solutions, to broadcasting the world’s best educators across a much larger student base and outfitting classrooms with everything required to go digital, partners are the enablers of the solutions governments and institutions need to digitally transform.

“The tech channel has had a tremendous pandemic in a tremendous industry, digital transformation will present opportunities for you across the board. Particularly, we recommend you start focusing on education. If you haven't got an education division, you should have,” Brazier said.

“Slightly longer term, we want to encourage you to look at healthcare, on top of all the other trends that we’ve seen and talked about so often.

“You are more needed than ever. The complexities inside technology, the more choices available, the amount of different tools, different systems, the need to develop new skills in protecting and securing data … it’s just gone up and up as a result of the pandemic.”