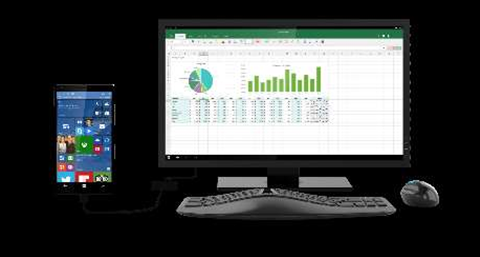 One of the demonstrations shown by Microsoft overnight at its Build developer conference was the ability for Windows 10 phones to operate as a defacto “PC”.

The idea is that because Windows 10 apps will in theory scale from one screen size to another, phones will be able to connect wirelessly to second screens, making it easier to work on emails and other applications when users are away from their main computer.

You can see this in action in the video below:

Microsoft has already laid out its vision for these “Universal” apps, that will use one code base but have the ability to scale to different device screens.

Using the Continuum feature, rather than viewing Outlook messages on the phone screen, the phone scales up the interface to a “PC-like experience” on a bigger screen.

For example, the video shows a user previewing an email message in Outlook on a big screen, with Outlook running on their phone. Messages can be edited using Word’s formatting capabilities, as you would on a desktop PC, and you can also use keyboard shortcuts.

The video also points out that phones will work independently from the main screen. So, for example, you could take a call, while editing an email on the big screen, with both tasks running on the same phone.

The feature will require new hardware capabilities that will ship with devices running Windows 10.

Grow your software revenue by selling these 5 affordable, essential tools for the modern workplace
By William Maher
Apr 30 2015
7:03AM