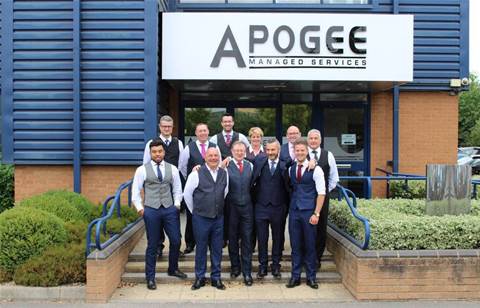 HP Wednesday said it has entered into a definitive agreement to acquire Apogee, Europe's top multivendor managed print services provider, as part of its all-out charge to increase its share of the US$55 billion A3 print copier replacement market.

HP said the deal values UK-based Apogee – which has deep multivendor relationships with HP and major print vendors including Xerox, Konica Minolta, Kyocera and Canon -- at US$499 million.

Apogee, which has 1000 employees and US$300 million in annual revenue, currently does only a small share of its managed print business with HP.

HP billed the acquisition as a move to "boldly" leverage the industry shift to contractual sales as it aggressively pursues the A3 copier replacement market.

HP imaging and print president Enrique Lores said the deal is a major step for HP to grow its contractual print business. "We are really excited about the opportunity that this deal opens for us," he said in an interview with CRN USA. "We can really advance and accelerate our growth in the contractual space."

Lores said the deal "complements" HP's broader strategy and does not signal a move to increase the percentage of business that it takes direct. In fact, he said, HP is committed to growing its channel business as a percentage of total revenue beyond the current nearly 90 percent mark.

HP said that Apogee will have the "same commercial relationship" with HP as any other "premium partner" with the same access to tools and programs.

In fact, he said, one of the key benefits from the acquisition will be HP's ability to accelerate its knowledge of the contractual managed print services and solutions market to boost the channel. "As we improve our knowledge, it will be easier for channel partners to do business with us and should translate into a benefit for all of us," he said.

Once the deal is finalised, Apogee – which has up until now touted its "independence" and "brand-agnostic" print services capabilities -- will be run as an independent subsidiary of HP with a board composed of Apogee and HP executives.

HP said it expects the current Apogee management team to stay in place with the managed print services provider continuing to sell and service solutions from multiple vendors.

Apogee, which has an installed base of tens of thousands of printers and copier units, has long-standing customer contracts involving major vendors including Xerox, Canon and others besides HP that it will continue to honor, said HP.

"Over time we expect the majority of their sales will move to HP," said Lores. "We don't think it will ever be 100 percent because there will always be customers that will demand other types of solutions. This is going to be a process that will take time. It is not something that will immediately happen when we close the deal."

HP said it expects the deal to close by the end of 2018 with Apogee results "accretive" by approximately 1 cent per share on a non-GAAP basis in the first full year.

Apogee reported $273 million in GAAP revenue in 2017 with earnings before interest, taxes and depreciation of $39.43 million.

Lores said the acquisition of Apogee comes on the heels of solution provider acquisitions by all of the top printer and copier vendors.

"All of the other key players in the industry have done this before and they have been able to complement their channel programs," he said. "This is what we are doing with Apogee. What we realised is we needed an investment like this to complement the investment that we are making with managed print services. We think the services and solutions capabilities they have are going to be a great complement to the infrastructure and systems we have built for managed print services. Channel partners should stay focused on keeping the relationship we have built with them. They should not distort the great progress and the great business we have been building with them over many, many years."