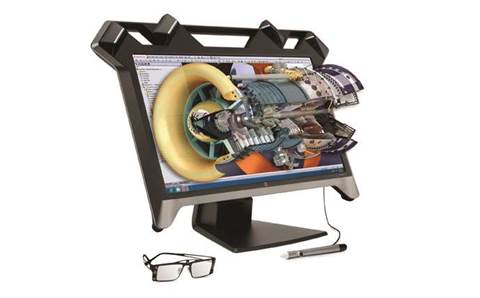 The HP Zvr Virtual Reality Display, which allows users to ‘pickup’ objects from the screen using a stylus, will be sold via HP resellers and distributors.

At $7,999 the 23.6-inch display is markedly more expensive than one other virtual reality device on the market - Samsung’s Gear VR goggles - which cost $249 plus the cost of a Samsung Galaxy Note 4. However the Samsung device requires users wear a much more cumbersome headset.

The HP display has sensor that track the user's head movements, while the stylus 'pulses' in response to certain user actions. The display has dual-link DVI or DisplayPort connectors, three USB 2.0 ports, and a native resolution of 1920x1080. It requires a separate PC.

The display uses technology from Zpsace, which ASI Solutions is also bringing to market in Australia. ASI Solutions told CRN it has received feedback from schools, as well as spoken to universities and received interest from hospitals and medical schools about the product. It will offer the Zspace 300 AIO unit from $8,799 excluding tax.

Meanwhile the price of Microsoft’s Hololens has yet to be announced.