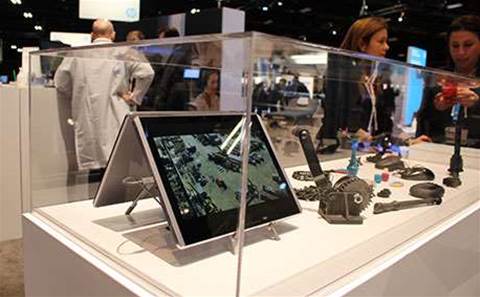 HP used the first day of its Global Partner Conference (GPC) to say it is opening up its 'Sprout' technology to the commercial channel.

Sprout, which has been available to consumer market from HP since October, combines a 3D scanner, a 1024x768 DLP projector, an all-on-one computer with 1920x1080 touchscreen running Windows 8.1 and a 20-point capacitive touch mat into a single device that has applications from 3D printing to architecture, and from education to collaboration.

HP has dubbed it 'immersive computing', and calls it an entirely new category.

Sprout has been the biggest hit on the floor of GPC, drawing strong crowds for the demonstrations.

During one demo, CRN Australia witnessed a number of use cases for Sprout: projecting a virtual piano keyboard onto the touch mat, which could be used for music lessons; capturing 2D images of plastic fruit that could be immediately manipulated via either the touchscreen or images projected onto the touch-sensitive mat; and using the touch mat as a digital whiteboard for remote collaboration between teams.

As an examples of the opportunities in 3D printing, the demonstrator scanned his own arm to create a life-like graphic render on-screen. 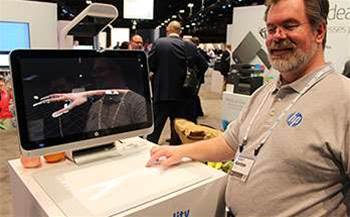 During his keynote, Dion Wiesler – the Australian who is soon to be chief executive of consumer business HP Inc – revealed that Sprout will be rolling into the commercial channel "today", and also hinted at further news of a commercial-grade technology "later in the year".

HP has confimred that Sprout will be launched into the Australian channel in 2016.

Wiesler said that Sprout is an "on-ramp to bring the physical into the digital" – he expected opportunities in the commercial space as "ad agencies, designers, educators and moviemakers embrace this new immersive experience".

Sprout, which currently retails for US$1,899, is one component of HP's new 'blended reality' strategy; the all-in-one is the input for physical items into the digital environment, while HP's 3D printing technology will offer the output method.

HP announced its long-awaited entry into 3D printing last year. The product, which uses its own Multi Jet Fusion technology, is still in development and will launch in the second half of 2016.

The vendor has claimed that Multi Jet Fusion could be at least to 10 times faster than the current 3D print technology, at "a fraction of the cost". Vertical integration of HP intellectual property is one way to keep costs down.

"We are bringing our 30 years of rich print expertise to 3D, leveraging investments in IP, more than 5,000 patents from our core [printing technology] to create breakthrough innovation for the hyper-growth commercial space," said Wiesler.

To show off the strength of the 3D printed items, Wiesler held up a 3D printed chain link – which CRN also saw on the exhibition floor – that he said "was printed in under 30 minutes, weighs less than a quarter of a pound and can lift up to 10,000 pounds". The demo showed the chain link lifting a car.