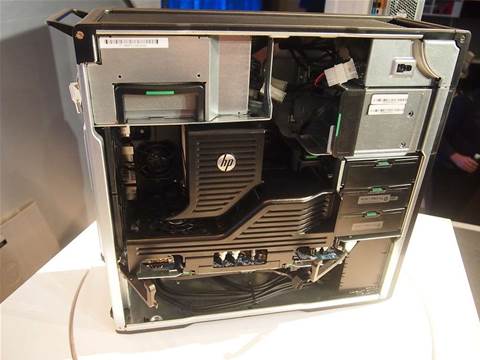 HP today took the wraps off its upgraded line of Z workstations in partnership with Intel, as part of a comeback campaign designed to win back market share following a difficult 2011.

The HP Z820, Z620 and Z420 were designed to meet the needs of HP’s “most demanding” customers. The set offers up to 512 GB of DDR3 memory, third-generation PCI Express technology for graphics cards and supports various workstation applications.

HP also talked up its green credentials, with the new Z line boasting 90 percent efficient power supplies and recyclable materials. The three workstations will be available globally in April. Pricing for the Z420 starts at $US1,349 ($A1279) with the Z620 costing from $US1,549 and the Z820 priced from $US1,949.

The new line follows HP’s promise to increase investment in R&D and HP Labs, after a year which saw it launch the much-touted webOS operating system and accompanying TouchPad tablet, only to ditch both within months of release.

The upgraded Z workstations, along with the Z1 and HP’s push into the ultrabook market with the Folio and Spectre, form part of the company’s attempt to regain its status as the number one PC maker globally after the future of its hardware division was cast into doubt.

"We didn’t make the investments we should have during the past few years to stay ahead of customer expectations and market trends," she said. "As a result, we see eroding revenue and profits today. We need to invest now, as a market leader, from a position of strength."

Cloud application revenue made easy
By Allie Coyne
Mar 7 2012
9:43AM