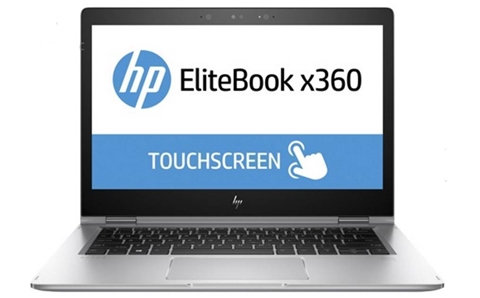 If there was a time when Apple could claim a monopoly over flawless integration between laptop hardware and software, that time has apparently passed. HP's new EliteBook x360 is one notebook from the Windows universe where just about everything works like a gem, even though HP isn't the creator of the underlying operating system, as Apple is for its computers. CRN USA found the EliteBook x360 touchpad to be especially impressive, on par with Apple's much-revered MacBook trackpads. But how does the laptop compare overall to its closest counterpart in the Mac realm?

For this comparison, however, we'll just be comparing the higher-end 13-inch MacBook Pro model (with Touch Bar), since that is the closest counterpart to the HP EliteBook x360.

The first major difference on the display is that while HP has opted to go with a touch screen for its newest EliteBook - as well as 360-degree foldability - Apple hasn't done either with the fall 2016 update to the MacBook Pro.

One area where EliteBook x360 has a leg-up is around the processor. The notebook uses Intel's latest top-of-the-line processors, the seventh-generation Core i (aka Kaby Lake). By comparison, Apple's latest MacBook Pro includes the previous generation of processors (Skylake).

Specifically, the EliteBook x360 has a few different configurations for the processor, with several choices for Core i5 or i7 chips. The top level is for a Core i7 chip with a clock speed of up to 3.9GHz. The MacBook Pro comes with a Core i5 processor (clock speed of up to 3.3GHz) as the standard, though the laptop is configurable up to a Core i7 chip (clocked at up to 3.6GHz).

Even though the EliteBook x360 includes a touchscreen display – a notorious battery drainer – the notebook promises a significant advantage around battery life over the MacBook Pro. HP pledges that the EliteBook x360 can get up to 16 hours and 30 minutes of battery life on a charge (our tryout verified that the laptop boasts strong battery life, meanwhile). Apple has more modest promises for the MacBook Pro, which the company says can offer up to 10 hours of usage per charge.

In overhauling the MacBook Pro, Apple paid special attention to giving the laptop an upgrade in portability. The outcome is that the MacBook Pro measures 1.49 cm thick, and weighs 1.36 kg. While that's a lot more portable than previous iterations of the MacBook Pro, it's not enough to out-do HP's latest premium laptop offering. The EliteBook x360 is a bit lighter, at 1.27 kg, and is identical in terms of thickness, at 1.49 cm.

Infamously, the latest MacBook Pro only comes with one type of port - USB-C/Thunderbolt 3. The model in our comparison comes with four USB-C ports, and other types of connectors will require a dongle.

HP did not follow Apple's example with the EliteBook x360 and included a range of ports in the laptop: two USB-A, one USB-C/Thunderbolt 3, HDMI, microSD and a smart card reader.

Apple's unique feature with the MacBook Pro is the Touch Bar, a touch-sensitive strip located in place of the function row of keys on the keyboard. The Touch Bar provides controls that adapt to whatever app is being used – such as volume or song changing in iTunes, or editing tools in Final Cut Pro X.

Seeing as the EliteBook x360 has a display that is entirely touch-sensitive, the laptop differs from the MacBook Pro by working with a digital pen. On security, the laptop includes HP's self-healing Sure Start technology and Windows Hello facial recognition, among other features (the laptop is also soon to get the Sure View integrated PC privacy screen). For easier workplace collaboration, the EliteBook x360 offers dedicated keys for launching Skype for Business, muting your microphone, sharing your screen and answering a call.