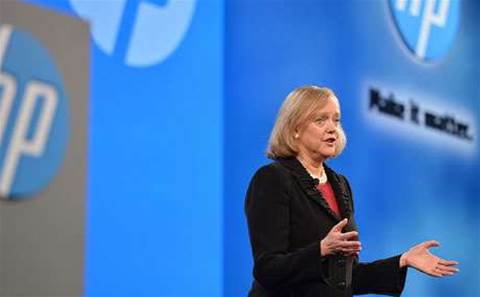 Hewlett-Packard shares were on the rise Tuesday in after-hours trading after the computer giant beat financial analysts' earnings expectations for its fourth fiscal quarter, helped in part by robust sales of its industry standard servers.

HP shares were up US$1.81 (A$1.99) per share, or 7 percent, to $26.90 in early after-hours trading after the $112 billion computer giant disclosed financial results for its fourth fiscal quarter, which ended on 31 October.

Hewlett-Packard, in fact, grew worldwide server shipments by more than 5 percent in the third quarter year-over-year, halting a slump of eight consecutive quarters of shipment declines, according to preliminary market data from Gartner.

At the same time, Dell's worldwide server shipments, which in the second quarter fell just shy of HP's according to preliminary estimates from Gartner, plummeted by more than 14 percent in the third quarter as the company closed a $24.9 billion leveraged buyout spearheaded by Dell Founder, Chairman and CEO Michael Dell.

The Enterprise Group's overall sales in the fourth fiscal quarter were up 2 percent to $7.59 billion compared to $7.45 billion in the year-ago quarter, and up 12 percent compared to the preceding quarter.

The Enterprise Group turnaround came after Whitman pledged to step up the server battle with Dell, saying she would not accept "very aggressive competitive pricing" from Dell or others as an "excuse" for poor sales performance at HP.

"Through improved execution, strong cost management, and with the support of our customers and partners, HP ended fiscal 2013 on a high note," said Whitman in a press release announcing the results. "Our Q4 results demonstrate that HP's turnaround remains on track heading into fiscal 2014. While we still have much more work to do, our business units and their core assets are delivering on HP's strategy to help customers thrive by providing solutions for the New Style of IT."