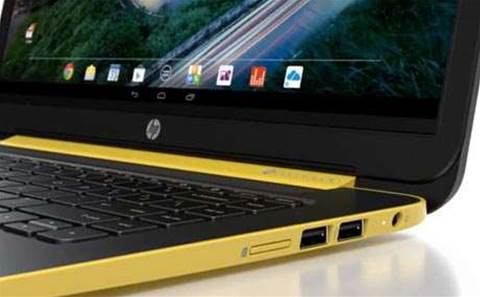 Would you use a laptop running Android – and only Android?

A leaked video suggests HP is working on a traditional laptop running only Google's mobile OS.

According to a video discovered on HP’s site by Notebook Italia, the Slatebook 14 will be a standard notebook, rather than a hybrid device such as the SlateBook x2.

That device is an Android tablet that docks into a keyboard to become a laptop. However, the leaked model looks to be a basic laptop, rather than a convertible, suggesting HP thinks people would be happy typing away into Android.

Other PC makers have opted for Android. The Asus Transformer Book Trio flips between Windows 8 and Android at the tap of a button on the keyboard - but, again, it's a convertible device.

Google's mobile OS is also increasingly being used for touchscreen all-in-ones, with Acer, Asus and HP all releasing Android models.

According to the leaked video, the Slatebook 14 will have a 14in, full HD 1,920 x 1,080 pixel touchscreen display, Nvidia Tegra quad-core processor, Beats audio speakers, and full access to the Google Play store.

It will apparently be a colourful product – the exterior of the device featured in the video is bright yellow. It's not clear which Tegra chip or how much memory it has, or even which version of Android it will run.

There's also no indication of when the device will be launched either, although the fact the video was originally uploaded on HP’s site (but has since been removed), could suggest a launch is imminent.

PC Pro contacted HP for comment on the leak, but the company said it does not comment on rumour or speculation.