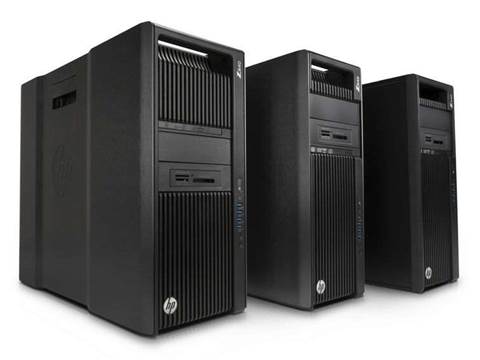 HP has revamped its line-up of mobile and desktop workstations, adding support for Thunderbolt 2 and PCI Express-based SSDs and ushering in Intel’s Haswell-EP Xeon CPUs.

Thunderbolt 2 is now available across all of HP’s mobile and desktop workstations, and the Z Turbo Drive – HP’s catchy moniker for a blisteringly quick PCI-Express M.2 SSD – comes as an optional upgrade.

At the top end of the desktop family, HP’s Z840 workstation is ready to accomodate a pair of the new chips – the air-cooled chassis is rated to cope with CPUs with a maximum TDP of 160W.

Memory capacity has improved dramatically, and there is now support for up to 2TB of DDR4 RAM – or at least there will be once 128GB DDR4 DIMMs become readily available.

Expandability has been given a boost too, and in addition to Thunderbolt 2 and HP Z Turbo Drive expansion via dedicated PCI Express cards, there are three Gen3 PCIe x16 slots and room for up to eight 2.5in drives in dedicated internal bays. It's also 5U rack mountable.

Further down the range, the Z640 shrinks slightly. It comes in a 4U rack-mountable chassis - but retains support for dual CPUs with TDPs of up to 145W, and its eight DIMM slots accept up to 256GB of RAM.

Meanwhile, the entry-level Z440 workstation has been redesigned, and provides support for a single 140W TDP CPU and up to 128GB of RAM.

HP has also upgraded its 15-inch and 17-inch mobile workstations; these have emerged as the ZBook 15 G2 and ZBook 17 G2.

Outwardly, nothing has changed, with both sporting the same burly, metal-framed industrial design to last year's models. Look closer, however, and just like their desktop cousins, the single Thunderbolt ports now reach Thunderbolt 2 speeds.

The hardware roster has changed slightly, too, with Intel’s Haswell Refresh range of CPUs taking centre stage alongside a range of professional GPUs from AMD and Nvidia. Both models also now support up to 32GB of RAM.

Both laptops also possess M.2 slots which are ready for HP's Z Turbo Drive, or indeed any aftermarket M.2 SSD. It's worth noting that the previous generation of the ZBook 15 and ZBook 17 also had M.2 support, but these were connected via a slower SATA interface. In our time with the new models, we saw the Sandisk drives managing sequential read speeds in the region of 700MB/sec - around 250MB/sec faster than the SATA M.2 generation.

HP also offers a variety of display upgrades over and above the standard Full HD displays, with 3,200 x 1,800 QHD+ and wide-gamut Full HD DreamColor panels set to bump up the price significantly.

All models are due to launch in late September. CRN will confirm the Australian launch date when information becomes available.