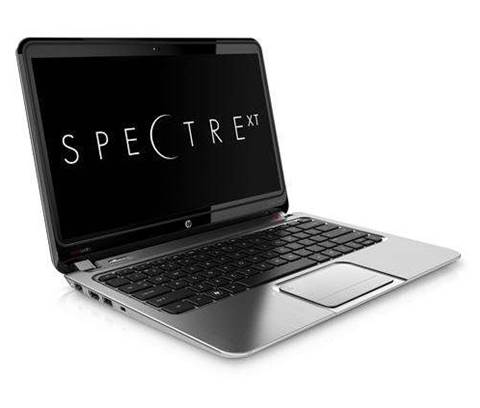 HP intends to be a major player in ultrabooks, and on Wednesday, this goal came into sharper focus with the unveiling of several new models tailored to business users.

At HP's Global Influencers Summit in Shanghai, China, CRN got a first-hand look as company executives took the wraps off the EliteBook Folio 9470m, an ultrabook featuring a 14-inch high-definition display and a sleek casing that's only 19mm.

Though it weighs just a bit more than 3.5 pounds, the EliteBook Folio 9470m comes with Ethernet and VGA ports built in, a measure of flexibility that HP believes will be a selling point with enterprises.

The EliteBook Folio 9470m also comes with Intel vPro and support for 3G and 4G LTE wireless broadband. It's expected to be available in October, but HP isn't talking about pricing yet.

HP, which launched its Envy 14 Spectre ultrabook in January at the Consumer Electronics Show, is adding a new model - the Spectre XT ultrabook. This is not the Gorilla Glass-coated stunner that turned heads at CES, but it does feature a lightweight design and, at $US1049 it's much less expensive than the Envy Spectre, which starts at $US1399.

Australian pricing and availability has not been anounced but the Spectre XT will launch on June 8 in the US.

The Spectre XT comes with Beats Audio, a high-definition display and video camera, and a TPM chip, which secures data on the solid state drive as well as in e-mail. HP has redesigned the touchpad, adding more real estate for Windows 8. It also packs Intel's latest line of Ivy Bridge processors.

There are minor design tweaks, too: HP's marketers found that spelling out "Hewlett Packard" on the casing conjured thoughts, in the minds of consumers, of the innovative aspects of HP.

As with the Envy Spectre 14, HP is sweetening the pot with full versions of Adobe Photoshop Elements and Premiere Elements preinstalled, as well as HP's Concierge service, which can help if the device is lost or stolen.

"This class of product will have value-added software, and the services offering will be more robust going forward," James Mouton, who leads the Personal Computers unit of HP's Printing and Personal Systems (PPS) Group, told the roughly 500 attendees at the event.

"The industry has moved beyond speeds and feeds. On the PC side, we're looking at the total process a businessperson gets involved in."

HP also unveiled its Envy Pro ultrabook line, which starts at $849 and comes with 14-inch or 16-inch high-definition displays, integrated Beats Audio, dual speakers and subwoofers. This line is aimed at creative professionals, though HP is clearly targeting the middle ground between personal and business use that consumerisation brings out.

Business notebooks get made over

"We're bringing designs out that deliberately push the line between the consumer and business user," said John Solomon, who last month was named head of the Americas division of HP's PPS division. "We want to amplify their ability to be creative."

Ultrabooks were the stars of the show at HP's Global Influencers Summit, but the vendor also is giving its regular business notebooks a refresh.

HP also unveiled new models in its ProBook line of notebook PCs. The b-series ProBook 6470b and 6570b models are coming June 4 and are priced starting at $US769. These models come with a 14-inch or 15.6-inch display, Intel vPro and an aluminum casing designed for the rigors of business travel.

HP began doing business in China in 1985, and today has R&D and manufacturing facilities in the country. Given China's emergence as a top global market for both PCs and printers, HP feels well positioned here, as was obvious during the keynote.

"If you don't have killer products, you can’t play the game," said Mouton, referring to the quality and differentiation HP builds into its PCs.

Telecommunications Services
By Kevin McLaughlin
May 10 2012
8:19AM