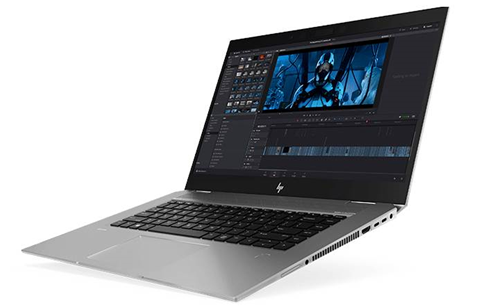 The new ZBook mobile workstations will target heavy-duty creators—such as developers, engineers, designers and architects—when they launch a few months from now, HP said. The new ZBooks will be suited for demanding work in areas such as virtual reality, artificial intelligence and 3-D, the company said.

What follows are the key things to know about HP's forthcoming ZBook Studio and ZBook Create.

The ZBook Studio and ZBook Create will include a 15.6-inch display with 4K/UHD resolution, and choices between LCD and OLED display technologies. There will also be an option for HP's integrated privacy screen, Sure View Reflect, which prevents "visual hacking" from onlookers, HP said.

The color accuracy of the display should be a major selling point for creative professionals, according to HP. The "DreamColor" display offers a "built-in colorimeter for automatic self-calibration, 100 percent sRGB and Adobe RGB for accuracy, and over a billion colors for smoother shading and more consistent gradients," HP said in a news release.

In addition, the notebooks are designed to have minimal bezels around the display, providing an 87 percent screen-to-body ratio on the devices, HP said.

The graphics capabilities on the new ZBook models are one of the biggest features for heavy-duty engineering and creative app users, HP said.

For the CPU in the new ZBooks, HP said it's offering up to Intel Core i9 and Intel Xeon (latest generation) processors. The company didn't disclose specifics on which processors will be available in which models.

HP is particularly touting faster performance on the new ZBooks than on the most comparable notebook from Apple, the MacBook Pro 16. The new ZBooks offer up to 7X faster rendering than the 16-inch MacBook Pro, according to HP.

The higher-end ZBook Studio, specifically, is "the most powerful workstation of its size," HP said.

The ZBook models have been designed to be more portable than the typical mobile workstation, which is often synonymous with bulkiness.

For starters, the notebooks have seen a reduction in volume of 22 percent from previous models, HP said. That's thanks in part to the slimmed-down bezels around the display, the company noted.

The new ZBooks also weigh less than 4 pounds—3.96 pounds, to be exact—and are fairly thin as well, measuring at 0.69 of an inch thick.

Another key feature for mobility with the new ZBooks is the generous battery life, which HP is estimating at 17.5 hours on a charge.

The ZBook Studio and ZBook Create are expected to be made available in August, HP said.

The company did not disclose pricing for the new ZBook models.