HPE Australia clamps down on special pricing 'by deceit' 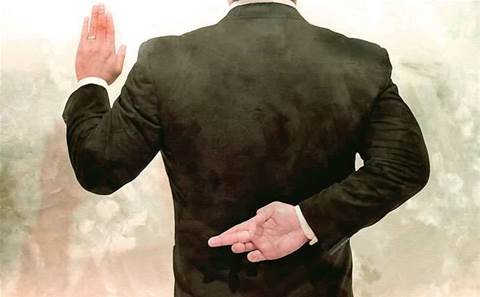 Hewlett Packard Enterprise South Pacific has instigated a new front-end, end-user verification policy to ensure that resellers can only get special pricing for the intended customer.

The policy should help stamp out partner program violations, such as resellers claiming a sale is going to a customer that gets discounted pricing, and instead supplying the product to a different organisation.

The vendor will apply the verification hurdle only to deals that it sees as "high risk". By focusing on high-risk deals, HPE should avoid imposing an "administrative burden" on the majority of channel partners.

For deals that have been deemed as high risk, HPE will require two pieces of information before marking a deal as 'won', according to an advisory sent by Chris Trevitt, director, partner sales, South Pacific, HPE. "The End User Verification Form (EUV) is to be completed by the HPE sales rep, and End User Confirmation (EUC), to be provided by the partner for partner-led opportunities."

The new end user verification policy is being rolled out in two phases.

The first phase commenced yesterday and runs until 31 January. Here, HPE will still mark deals 'won', but will require both forms to be provided prior to 31 January 2017. "Where information has not been provided, HPE reserves the right to conduct further checking," according to Trevitt's advisory.

"From 1 February  2017, deals flagged as ‘high risk’ will not be marked won or booked until both EUV and EUC is provided."

"A key to driving partner profitability is ensuring that HPE and our partners consistently meet the needs of our customers. This means the best solutions at competitive prices. Hewlett Packard Enterprise’s revised front-end end-user verification policy is fundamental to building a predictable commercial model," he said.

"It aims to drive pricing integrity, protect our partners’ investments within the sales cycle, and support our commitment to providing the right commercial outcome at the right time, married with the right technology. HPE’s policy is designed to minimise the administrative burden on our partners while supporting future partner profitability growth."

The policy can be seen as a signal of intent from Trevitt, who joined HPE from EMC in March 2016, as well as incoming regional boss Stephen Bovis, who will replace Alan Hyde from 30 November.

HPE partners welcomed the new policy, which should protect accredited partners and clamp down on grey market deals, though they were cautious about whether the verification process would slow down business.

Paula Fountain, national business manager HP Enterprise Group for one of the vendor's top Australian partners, Data#3, told CRN this wasn't the first attempt at such a policy.

"This is a process HP scrapped about two years ago in Australia and New Zealand because it tended to make things a little bit operationally challenged," she said.

"However, in saying that, there is a protocol they have to follow. It is all about compliance. We get that, we are on board and confident that HPE have taken the learnings from the past into account so as to have minimal impact this time around."

She explained that Data#3's Kim Weber, national manager customer engagement and supplier operations, would ensure that "when HPE presses the green light on this, we have every step in place to ensure there is no disruption".

"It is to reduce grey marketing. Everyone benefits from that, including HPE. However, the most important point is we don't want to put at risk any process that reduces our ability to service our customers," Fountain said.

"HPE have collaborated with us and acquired feedback on how they can improve this process to ensure a smooth transition with the reintroduction of [end user verification]."

Tony Cascio, owner of Sydney-based Metropolitan Computers & Supplies, one of HP's longest-serving Australian partners, was equally positive about the policy's intent, as long as it doesn't create bottlenecks.

"It will sort a few issues out. There are lot of people not doing the right thing. I think it is a good thing. HPE had the policy in place a little while ago then it disappeared because it was slowing down orders being processed," he said.

Cascio hopes it will stop resellers getting special pricing "by deceit".

"If you are asking for ridiculous pricing with high quantities and the customer is a 20-man show there is an issue; where people are putting bids up for an end user that only has 10 seats and they are buying 400 desktops or laptops or multiple servers and really it is to get a price advantage," he said.

"I think HPE has done the right thing. Their line of thought is 100 percent in the right direction. I just hope they have got their backend in order and it is not a process that will slow down the order or fulfilling of the requirements."

Cascio praised Trevitt for driving the verification policy. "Hats off for the initiative and I think it is good for someone from outside of the [HPE] channel coming in because it opens up a new set of eyes."