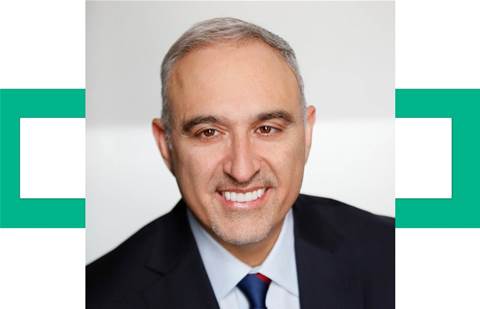 The share price dip came despite the company posting net earnings of US$480 million for Q4, a massive turnaround from a $757 million loss in the same period last year.

Sales in HPE's IT business, which makes storage and data centre networking products, fell 10.5%, while its unit that makes wireless network products posted a 6.5% drop.

But CEO Antonio Neri found a lot to like about the result.

“This was the best year yet between HPE and the channel,” said Neri in an interview with CRN after HPE closed its financial year with gross margin up 270 basis points from the prior year. “We made remarkable progress. We solidified our relationship [with partners]. The channel understands that we are and will continue to be a channel-led company.”

HPE’s shift to the GreenLake pay-per-use model continued to pick up steam in the fourth fiscal quarter, with HPE GreenLake orders through the channel up a whopping 326 percent, said Neri.

With the shift to GreenLake and higher value software-defined offerings, HPE partners have made a three-point improvement in gross margin year over year, said Neri.

That increase in partner profitability helped drive a five-point year over year increase in HPE’s channel Net Promoter Score (NPS), said Neri. “I’m really, really proud of that,” he said of the NPS score—a closely watched indicator of partner profitability and channel loyalty. “It was a record year. Obviously we have been very predictable…Our Net Promoter Score is twice as big as the next competitor.”

Partners are flat out “making more money” by teaming with HPE, said Neri. “Ultimately partners understand they can make more money with us,” he said. “In the end they need to make money, and they see Hewlett Packard Enterprise not only as a trusted partner that can grow with them but also as someone who provides them the ability to make more money. Ultimately we are better together in front of our customers. I feel pretty good about it. It’s the best year we ever had [with the channel], and there are still way more opportunities out there.”

HPE’s Annualised Revenue Run Rate—a measure of GreenLake pay-per-use traction as HPE shifts all of its products to an as-a-service platform by 2022—is at $462 million with an anticipated 30 percent to 40 percent compound annual growth rate.

Neri said the shift to higher value offerings helped drive a 20 percent increase in non-GAAP earnings per share for the fiscal year to $1.77. That translated into free cash flow from operations of $4 billion, up 35 percent from the prior year.

“We had a very good, strong year marked by strong execution,” said Neri. “We did what we said we would do. We grew in the areas that we pivoted the portfolio together with our partners.”

Neri’s call to action for channel partners for HPE’s fiscal year 2020, which started on Nov. 1: “Let’s go faster together. The customers need both of us. The customers are looking for a combination that allows them to deliver business outcomes way, way faster than before. We have built a very strong foundation. Let’s go faster. The market is moving faster than we have ever seen it before. We need to accelerate the momentum.”

Eliminating departmental friction within MSPs
By Steven Burke
Nov 27 2019
11:43AM