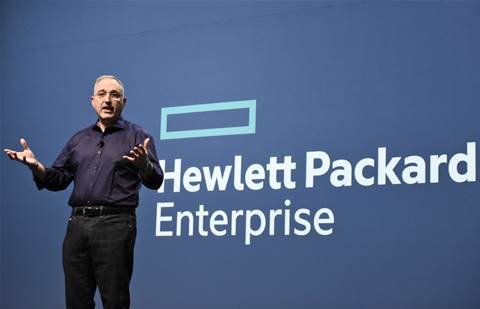 HPE CEO Antonio Neri Wednesday told shareholders at the company’s virtual annual meeting that that the COVID-19 pandemic is causing more customers to embrace the hybrid cloud IT as-a-service model.

“Customers are looking for the agility and simplicity of the cloud, but need the flexibility and control of a hybrid business model – and increasingly want to consume IT as-a-service where we have a unique and differentiated value proposition,” said Neri. “This is why I remain more committed than ever to our edge-to-cloud platform as-a-service vision that addresses these evolving customer needs -- and positions us to deliver long-term sustainable, profitable growth for our shareholders.”

The global pandemic has served as a “catalyst to bring digital transformation to the forefront” of business priorities, said Neri.

“Businesses are rethinking everything – from remote work and collaboration to business continuity to how to improve data-driven insights and customer engagement to business model evolution,” said Neri.

Neri was the first among the legacy infrastructure vendor CEOs to stake out the everything-as-a-service market with a no holds barred pledge to transform the entire HPE portfolio to as-a-service by 2022.

HPE was, in fact, the first of the legacy infrastructure provider to invest heavily in the channel pay-per-use model. The precursor to HPE GreenLake- HPE Flex Capacity – was unveiled in 2016. That Flex Capacity offering morphed into the much-heralded GreenLake 2.0 release in 2018.

Many partners have credited GreenLake – which provides a robust 17 percent up front rebate – for leading the channel everything-as-a-service revolution.

Cisco, for its part, took a giant step forward with its as-a-service model at Cisco Live last month with a Cisco Plus hybrid cloud solution which is slated to be available in mid-2021 and a Network as-a Service model, starting with Secure Access Service Edge (SASE) later this year.

At the HPE Aruba Atmosphere conference this week, Neri said GreenLake has put HPE in an as-a-service leadership position versus the competition. “We are strides ahead of our competitors,” he said. “They are unable to match the breadth and depth of our edge-to-cloud portfolio.”

“Customer retention rates are above 95 percent, and the average customer usage of our GreenLake Cloud Services is currently running at 120 percent of original commitment,” he said. “We are excited about this long-term opportunity and are very confident in our 30-40 percent Compound Annual Growth Rate target by fiscal year 2022.”

HPE’s GreenLake is driving critical higher-margin, recurring revenue streams for HPE and its partners. HPE’s Annualized Revenue Run Rate – which measures the recurring revenue business – was $649 million in the most recent quarter, up 27 percent year over year. “This is a long-term value driver – and we expect our ARR will grow to over $1.4 billion dollars over the next three years,” said Neri.

HPE added more than 70 new GreenLake cloud services customers in the most recent quarter. “We signed several of our largest HPE GreenLake Cloud Services deals in history last year, including LyondellBasell, one of the largest plastics, chemicals and refining companies in the world, who signed a $27 million dollar HPE GreenLake deal to drive their digital transformation and environmental efficiency,” said Neri in his address to shareholders.

Overall, GreenLake cloud services sales in the most recent quarter through the channel were up 116 percent year over with the number of active partners up 62 percent.

The GreenLake indirect mix – which was in the single-digit range several years ago – is now at 29 percent, up 11 points year-over-year in the most recent quarter.

The broadest as-a-service portfolio in the market

Neri told shareholders that HPE’s “industry leading” GreenLake Cloud Services portfolio is the “broadest in the market” delivering “optimized solutions” for any workload from edge to cloud including workloads in public cloud environments.

HPE has launched an all-out distribution sales offensive with the ability to launch the GreenLake cloud service directly from distributor cloud marketplaces.

HPE said over 100,000 partners can now access GreenLake through the distributor cloud marketplaces.

HPE’s Silver medallion and proximity partners grew their share of the GreenLake business by 29 percent in the most recent quarter compared to the year ago quarter.

Neri said small and medium sized businesses are a prime target for the HPE edge to cloud portfolio.

HPE relies on its nearly 200,000 partners around the globe to help target those small businesses, said Neri.

“We have a fantastic, phenomenal portfolio from edge to cloud that we can use to help small businesses thrive in this economy,” he said. “They need access to this technology no different than the very large or global 2000 enterprises around the globe.” “We are accelerating our momentum in this business with rich software capabilities like ClearPass security, cloud-native Aruba Central and Aruba Edge Services Platform,” he said. “Late last year, we acquired Silver Peak providing an immediate presence in the attractive SD-WAN market that is growing over 20 percent. In Q1 we reported 11 percent revenue growth year-over-year. We expect to outpace the market and grow revenue at a 6-10 percent compound annual growth rate through Fiscal Year 2023.”

Among the major customers wins on the Aruba edge platform, said Neri, are Lending Tree which is standardizing on the Aruba Edge Services Platform (ESP) as part of a commitment to a mobile first workplace and the Pentagon which selected Aruba to modernize both its classified and unclassified networks, supporting tens of thousands of devices on the Aruba ESP architecture.

Aruba recently increased rebate incentives for the Aruba NaaS (network as-a-service) solution as part of the GreenLake for Aruba offering. In addition, the Aruba partner program now provides partners an opportunity to generate monthly recurring revenue over the life of the NaaS contract.

Neri said the need for edge to cloud architectures is resonating in a post COVID world. “The need for edge-to-cloud architectures has never been more relevant as enterprises look to extend connectivity to branch locations and enable secure work-from-home experiences,” he said. “The explosion of devices, applications and data at the edge will continue to fuel demand.” Neri told investors that HPE is strengthening its core compute and storage businesses which are helping drive GreenLake sales growth.

“Our core businesses in Compute and Storage provide critical capabilities to customers, generate substantial free cash flow, and are foundational to our edge-to-cloud platform as-a-service strategy,” Neri told shareholders. “Every 60 seconds, we ship four servers and 46 terabytes of storage. We have industry-leading portfolios in compute and storage and will continue our focus to grow in profitable segments.”

HPE is pushing GreenLake aggressively into the midsize and even small business market with new GreenLake compute and storage instances sized at 100 virtual machines in standardized blocks of 4,8, 16 and 24 compute nodes along with a new backup as-a-service option for those instances. The new backup as-a-service option comes with storage as-a-service offerings now representing 30 percent of overall GreenLake sales. The new VM instances – which HPE refers to as T-Shirt size options- pushes GreenLake down market and makes it more relevant for small and midsize businesses. HPE also recently announced a new GreenLake cloud services for bare metal servers option. The new services allows bare metal servers to be provisioned and managed directly from HPE GreenLake Central. The bare metal option allows customers to have a custom server tailored specifically to their configuration, performance and cost requirements.

High Performance Compute (HPC) is a key component of “HPE’s vision and growth strategy” as it moves to help customers “process, analyze and extract insights from massive amounts of data,” Neri told shareholders.

HPE, in fact, sees a “tremendous opportunity” to accelerate mainstream adoption of HPC with the recent launch of HPE GreenLake Cloud Services for HPC, said Neri. That as-a-service market opportunity translates into a $3 to $4 billion dollar total addressable market, he said.

The new cloud services—which comes in small, medium and large options—allows customers and partners to order HPC -a-service through a self-service portal with delivery from configuration to rollout in as few as 14 days.

Overall, HPE has a “strong backlog” of awarded HPC business that exceeds well over $2 billion dollars for primarily Exascale contracts and a robust pipeline of multi-million dollar sized deals, said Neri. “We remain on track to outpace the market and achieve a compound annual growth rate of eight to 12 percent through Fiscal Year 2023,” he said. HPE is in the process of putting together a GreenLake high performance compute (HPC) as-a-service that channel partners can bring to market.