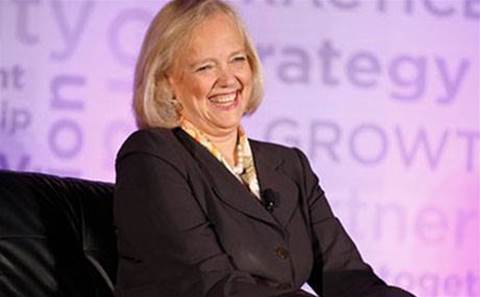 Hewlett Packard Enterprise chief executive Meg Whitman has told CRN USA that she is set to "redouble" her channel efforts after the company posted a 10 percent drop in sales for its first fiscal quarter, ended 31 January.

"I am redoubling my efforts on the channel," said Whitman, noting that she recently met with US$14 billion solution provider behemoth CDW and called the top 10 HPE channel partners.

Whitman has called the new Synergy systems – billed as the industry's first composable infrastructure – as the biggest HPE breakthrough in the last decade.

"That is a big opportunity for the channel because you can just go and refresh HPE's existing installed base of blades," said Whitman. "The next place you go is after (Cisco) UCS (Unified Compute System), and then the third place you go is to use it as a hunting license because it is a brand new, no one else has this product category. It is a fantastic hunting license. Anyone will take a meeting to understand Synergy."

Whitman said she is also making sure the channel is aggressively moving to sell the HPE Arista data centre switching product, and the new SimpliVity converged infrastructure portfolio.

"I just need to get out and explain it to the channel partners, making sure that they are embracing it and making sure that we are doing everything we can to help them... I have been doing separation, some M&A, running around. I am back to my first love: the channel."

HPE closed the US$650 million SimpliVity acquisition just last week with the first product- a converged infrastructure offering on HPE's most popular server line – the DL380 – set to be released in May. "SimpliVity is a big, big opportunity for the channel," she said. "That is a US$2.5 billion market growing at 25 percent compound annual growth rate."

The preferred data centre switching reseller agreement with Arista, which was announced last fall, is also a top HPE channel priority. "Arista has no channel presence," said Whitman, noting that the software-defined data centre superstar has grabbed 13 points of share from Cisco in the last two years. "We are their vehicle into the channel."

Whitman's channel charge comes after the company posted a 10 percent drop in sales to US$11.4 billion for its first fiscal quarter ended 31 January, compared with US$12.72 billion in the year-ago period. The Wall Street consensus was sales of US$12.07 billion, according to analysts polled by Thomson Reuters.

HPE said it was hit hard in the quarter by higher memory prices, foreign currency impact, sales execution in Enterprise Group and lower than expected demand from a tier one cloud service provider. As a result, HPE reduced its full fiscal year earnings per share estimates by 12 US cents per share. HPE said it now expects non-GAAP diluted net earnings per share for the current fiscal year to be in the range of US$1.88 to US$1.98.

Whitman, for her part, said HPE could return to growth in fiscal 2017 as a standalone company – once it completes the spinoff of its Enterprise Services and software businesses – if not for the tier one cloud service provider – a major customer- that is slowing down orders "dramatically."

"For the rest of the business- x that large single tier one service provider- I think we have set ourselves up well to be prepared to tackle the future," said Whitman. "I like our portfolio. We have really reshaped this portfolio both inorganically as well as organically."